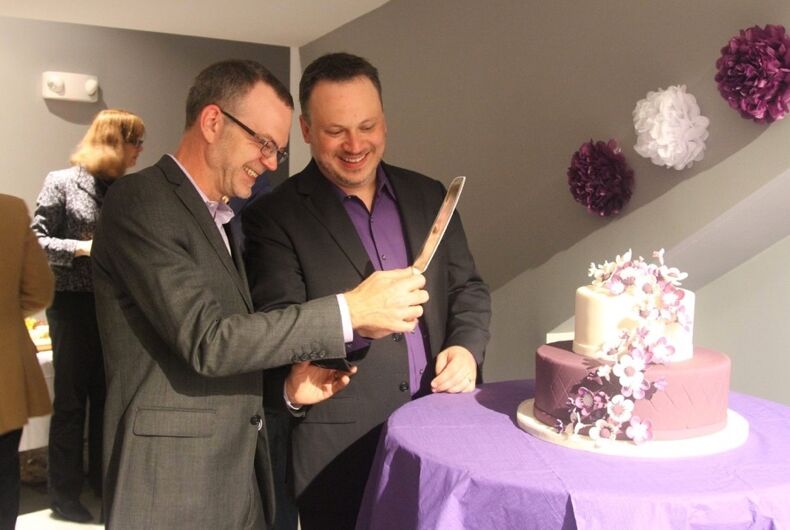 Eighteen years ago today, I went on a date with a guy I didn’t want to meet. Two years ago, I married him.

The fact that my husband and I ever went on that first date is practically miraculous. I spent months trying to shake Jerame and his advances; I actively discouraged him, in fact.

I lived with my ex-boyfriend, Matt, at the time. We hadn’t been together for a couple of years and Matt had moved in with me and the roommate to save money when he returned to town after living elsewhere.

Matt had recently discovered the local AOL gay chats that were the new wave of hooking up at the time. He dove in with gusto, shall we say, but was soon complaining about his dating prospects.

“I’m going on all these dates, but… nothing. No boyfriend,” he moaned one night.

By this point, I was tired of hearing about it. Matt has a tendency to be a little willfully blind about personal issues and I was fed up. He had a personal ad up on [email protected] and apparently that was enough to cover the chat rooms too.

“If you have three ‘dates’ in one night or you don’t get to see a movie because you end up having sex in the parking lot before you get out of the car and then he just drives you home, you’re not having dates. You’re having hookups,” I told Matt. “AOL is about sex. Not love.”

Matt insisted that he wasn’t hooking up with several random strangers to have sex because he liked it, but instead patiently explained that it was the new way to find a man to settle down with. His problem, he insinuated, was that he wasn’t meeting any quality men. It was a personal ad, dammit! That said “relationship.”

“Anyone can get laid off AOL, Matt.” I told him. “Watch. I’ll make a personal ad there and we’ll just see how many responses I get. Most of them don’t even read it; they just cruise the photos.”

I sat down at the computer, logged on, and created the dumbest personal ad I could think of. I made up all sorts of silly responses to answer all the various questions about yourself and what you’re looking for. None of it was even true except for my height, weight, etc. As I finished and it was time to give it a subject line, I looked at Matt and said, “I might as well advertise for what I always get.”

I headlined the personal ad with, “Looking for Someone Slightly Freaky.”

Jerame was the first person to answer.

Shortly after Jerame answered the ad, I wrote him back a short note explaining what I’d done and why and flatly told him I had no interest in meeting him. Jerame wrote back and suggested that we at least be friends since he was new to town and lonely. He told me about going to a seedy bar that night and getting sloshed. He was drunk while he wrote his e-mail to me.

I was a personal mess and the last thing I needed in my life was a man to screw it up further. Seeing that my e-mail back to Jerame had only encouraged more contact, I never wrote anyone else who responded (although dozens did). I’d proved my point to Matt – that was enough for me. I didn’t even bother responding to Jerame’s second e-mail.

Jerame, however, had other plans.

Malcolm X was a ‘gay for pay’ hustler in his youth