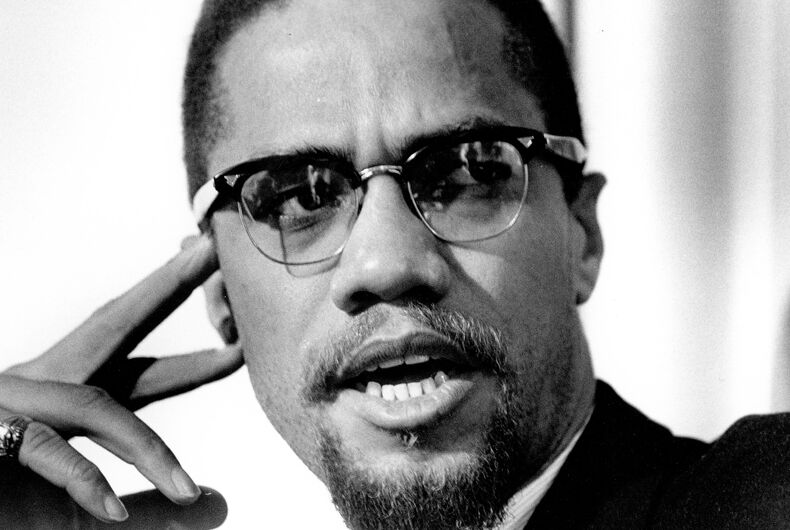 Before any of us in the lesbian, gay, bisexual, and transgender communities laud Malcolm X as our new gay icon or castigate him for being a black heterosexist nationalist on the “down low,” we might need to closely examine the recent revelation that for a period in his life Malcolm X engaged in same-sex relationships.

Also, before any of us in the African-American community flatly dismiss these assertions as part and parcel of a racist conspiratorial propaganda machine that is out to discredit our brother Malcolm, we need, at least, to hear these nagging claims.

And this time hear them coming from one of our own – Manning Marable, a renowned and respected African American historian and social critic from Columbia University.

Sadly, Marable died just days before the release of his magnum opus, an exhaustive and new 594-page biography Malcolm X: A Life of Reinvention, on the anniversary of Martin Luther King’s assassination in 1968.

His assertions in the book – derived from meticulously combing through 6,000 pages of F.B.I. files obtained through the Freedom of Information Act, records from the Central Intelligence Agency, State Department and New York district attorney’s office, as well as his interviews with members of Malcolm X’s inner circle and security team – leaves the reader in shock and awe.

For those of us who always thought Malcolm X’s assassination, as with King’s, had everything to do with J. Edgar Hoover’s FBI, we are correct. Marable emphatically states that both the FBI and NYPD had advance knowledge of Malcolm X’s assassination plot and did nothing to stop it.
But what will come as a shock is Marable’s assertions that the Malcolm X the world has come to know through Alex Haley’s 1965 New York Times bestseller The Autobiography of Malcolm X and Spike Lee’s 1992 film Malcolm X based largely on Haley’s book is fictive. And the spin we have, in part, is due to Malcolm himself.

In creating an autobiographical narrative that would have his book fly off of bookshelves as well as elevate his status to a national – if not world – stage, Malcolm X intentionally fabricated, exaggerated, glossed over, and omitted vital facts about his life. One such fact omitted was his same-sex relationship with a white businessman.

The claim, no doubt, will become a hotly contested topic in sectors of the African American community. With an iconography of racist images of black masculinity ranging from back in the day as Sambos, Uncle Toms, coons, and bucks to now gangsta hip-hoppers, Malcolm represented the negation of them.

As a pop-culture hero to young black males of this generation and as the quintessential representation of black manhood of both America’s black civil rights and Black Power eras, a gay Malcolm X will be a hard, if not impossible, sell to the African American community.

Harlem has come to bid farewell to one of its brightest hopes. …Malcolm was our manhood, our living, black manhood! This was his meaning to his people. …And we will know him then for what he was and is. A prince. Our own black shining prince who didn’t hesitate to die because he loved us so.

For a gangsta hip-hop generation, Malcolm Little – before his conversation to the Nation of Islam and name change – represents for them a lauded hypermasculinity. And their male-dominated musical genre is aesthetically built on the most misogynistic and homophobic strains of Black Nationalism and afrocentricism.

But this claim by Marable, however, of Malcolm’s same-sex relationship is not new. Reports of Malcolm X’s queerness was first revealed in Bruce Perry’s 1991 biography, Malcolm: The Life of a Man Who Changed Black America.

According to Perry, Malcolm’s same-sex dalliances date back to childhood where he enjoyed being masturbated or fellated. In his 20s, Perry informs us, Malcolm had a sustained sexual relationship with a transvestite named Willie Mae, and also he had sex with gay men for money, boasting he serviced “queers.”

I am not heterosexist apologist, but if we, as LGBTQ people, use this era of Malcolm’s life to claim him as gay, we misunderstand the art of survival in street hustling culture.

Similarly, if we, as African-Americans, use this era of Malcolm’s life to dismiss that he engaged in same-sex relationships, many will miss the opportunity to purge ourselves of homophobic attitudes.

When Malcolm came to Boston to live with his older half-sister, Roxbury’s Ella Little Collins, he was 16, having dropped out of school at 15. With no job skills and looking for the most expedient route to acquire money, Malcolm peddled cocaine, broke into homes of Boston’s well-to-do, gambled big at poker games, and unabashedly serviced gay men for pay.

While it can be argued that Malcolm’s same-sex encounters were not solely financially motivated, let us also not dismiss that the only evidence we do have is the context in which he was.