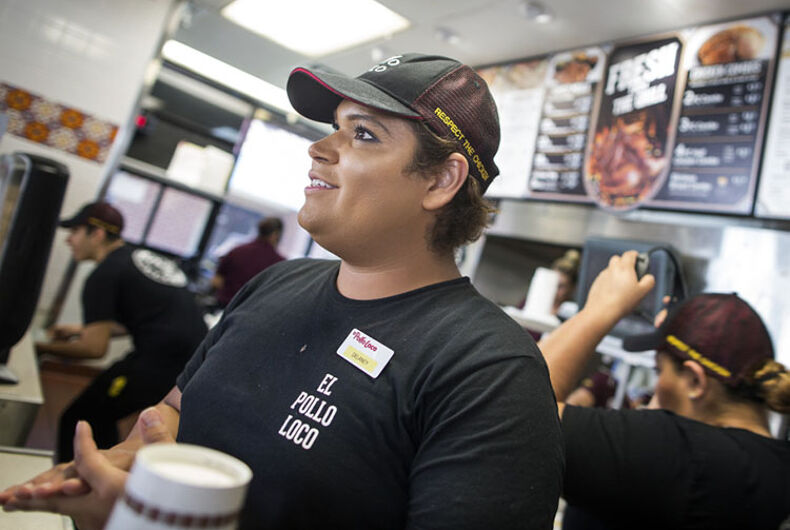 “Trans people are vulnerable when we come into the workplace,” said Drian Juarez of the Los Angeles LGBT Center. “If somebody makes fun of us, we may not have the wherewithal to stand up for ourselves because we don’t want to jeopardize our jobs.”

To entice owners and managers, a $150,000 grant from the California Workforce Development Board will pay the first 60 hours of a new hire’s wages.

The project is the brainchild of Michaela Mendelsohn, an out trans woman and owner of six Southern California El Pollo Loco restaurants, who’s employed trans people for years.

“The word’s just gotten out that I’m a trans owner supporting trans people,” she told SCPR. Mendelsohn believes about 8 to 10 percent of her 150 employees are trans.

But until she hired her first trans employee in 2012, she was the only trans person in her restaurants. That trans woman told Mendelsohn of her trouble securing an entry-level position. Upon meeting her, interviewers told her that there were no open positions, and recalled how hiring managers would laugh or scoff when she entered the room.

Mendelsohn decided something more needed to be done, and started collaborating with the Los Angeles LGBT Center and the TransLatin@ Coalition to find jobs for other out-of-work trans people.

Hear a report from SCPR on the program here.

Will NCAA decision be the tipping point for North Carolina’s anti-LGBT law?