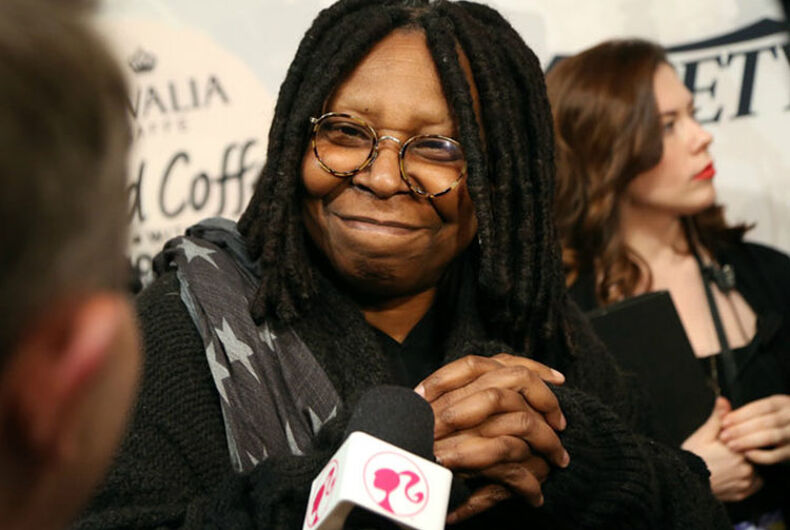 Whoopi Goldberg talked about dicks when she appeared on The Late Show with Stephen Colbert this week.

Not just the kind she encounters in Hollywood, but the ones the stars of her new reality TV program about a transgender modeling agency keep getting asked about.

The View cohost is executive producer of Strut, and as PinkNews reported, Colbert shared a clip with his audience in which one trans woman is asked if she has a penis, using the colloquial term.

Goldberg explains: “You don’t ask that to anybody.”

“Do you have a dick?” asked Colbert in jest.

“I have several, but you know what? It would be like meeting someone and saying ‘hey, I want to ask you something, how tight is your vagina?'” Goldberg replied.

“Don’t ask that question! These are questions you just wouldn’t ask other people.”

“You wouldn’t ask people that, but because it’s so new for folks… People feel transgender folks have just got here and this is very new, but transgender people have been with us for years.

“One of the reasons you don’t know that is folks don’t talk about it. You see Caitlyn Jenner or Laverne Cox and think that’s what it is, but the folks that we’re bringing to the show are regular people who are just trying to have their lives.

“These are folks who know who they are inside… transgender people seem to make people uncomfortable for some reason. Talking to a lot of the folks we’re working with, they say ‘we’ve had to do other kinds of work because people won’t hire us because they’re nervous or uncomfortable’.

“I think [being a model] is a good way to not have to go in another direction because you’re a transgender person. Their bravery to stand up and say ‘this is who I am’ in a world where people think it’s funny or think it’s silly or don’t understand or who get very religious about it… it’s like, listen.

“God doesn’t make mistakes but Mother Nature will mess with you until the cows come home! You know who you are, I know who I am. Sometimes people arrive and there’s a little mix-up and they’re not in the right place.

“To be able to say it out loud, I have to tip my hat to these folks.”

Strut premieres on Oxygen September 20. Watch Whoopi Goldberg on The Late Show with Stephen Colbert below.