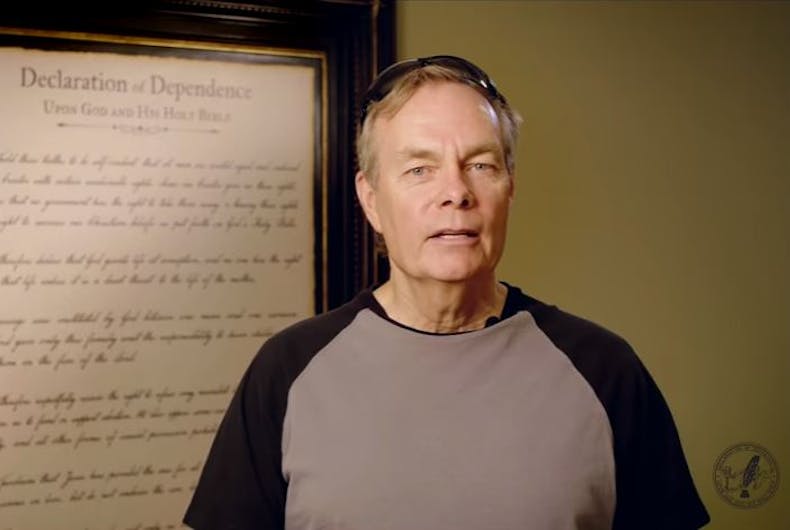 Some of Donald Trump’s closest religious right supporters have signed a “Declaration of Dependence on God and the Holy Bible” vowing to “refuse any mandate by the government that forces us to fund or support abortion” and to “oppose same-sex marriage, polygamy, bestiality, and all other forms of sexual perversion prohibited by Holy Scripture,” Right Wing Watch reports.

Two of the signers to the declaration are members of Trump’s evangelical advisory board: televangelist Kenneth Copeland and Focus on the Family founder James Dobson.

Jerry Boykin, the executive vice president of the Family Research Council, also signed the pledge, as well as being one of several retired military leaders to sign a letter endorsing Trump. Another signer to the declaration of dependence is Lance Wallnau, a member of the “National Diversity Coalition for Trump.”

Colorado Springs pastor Andrew Wommack wrote the pledge and says he will spend half a million dollars – or enough to vaccinate 840,000 children against polio – promoting it online and in newspaper ads. On Sunday, his ministry ran a full page ad in The New York Times with the full text of the declaration and some of the more notable signers.

Religious right activist David Barton is also on board. He has been teaching students at a Bible college run by Wommack, the Charis Bible College in Colorado.

Right Wing Watch reports Seven Mountains theology as teaching that Christians are to take control of the seven primary institutions, or “mountains,” that shape and control our culture — (1) Business; (2) Government; (3) Media; (4) Arts and Entertainment; (5) Education; (6) Family; and (7) Religion — and use them to implement biblical standards and spread the Gospel.

Observers have noted the similarity between this declaration and the so-called Manhattan Declaration, which saw Orthodox, Catholic and Evangelical leaders sign a statement saying they would hold to their convictions and faith in the face of laws they found objectionable.

In a video message about the “Declaration of Dependence on God and the Holy Bible,” Wommack claims to have felt “divinely inspired” to write the statement and warns that “Satan is fighting for the heart and soul of this nation.