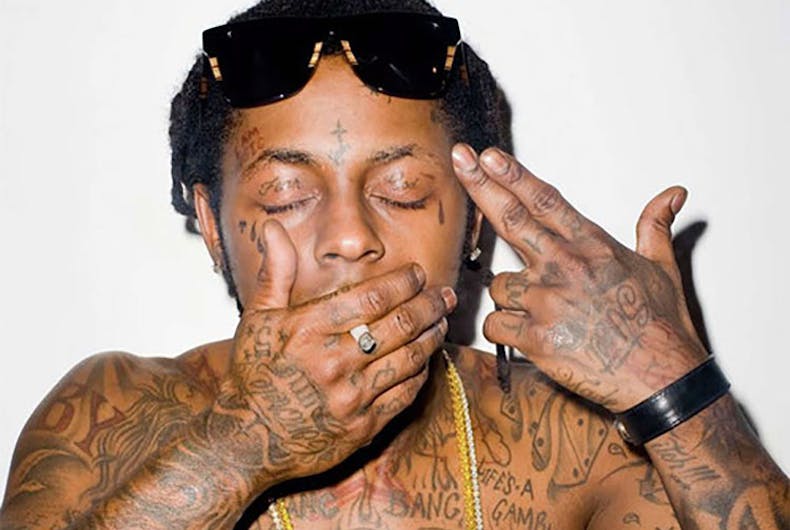 Give Lil Wayne some credit. He may be heterosexual and may have a criminal record for weapons possession, but that doesn’t preclude the rapper from being a straight-up LGBTQ ally who just happened to spend eight months on Rikers Island.

In his new autobiography due in bookstores next month, Wayne writes about his 2010 incarceration inside New York City’s notorious correctional facility, including the same-sex wedding between two cellmates at which he officiated, and more, according to People.

“Imagine seeing grown-ass men in jail hanging tissue for wedding decorations. AND one of them is Lil Wayne. Crazy.”

The memoir, Gone ‘Til November,  also reveals that the rapper’s girlfriend slept with his rival Drake while he was in the pokey and that a plan he had to recreate the infamous scene from the film Basic Instinct was foiled when guards inspecting visitors discovered that same girlfriend of Wayne’s was not wearing underpants.

All this comes as Wayne marks his 34th birthday, which BET reports prompted an Instagram post from his daughter:

Happy birthday to my father 🤗 lawd this man swear he not old 🙈 I love this man so much ! I can tell him anything without being judged ! Thank you for always loving me . Thank you for saying yes when my mom says no . Thank you for telling me I'm beautiful everyday . God , thank you for blessing me with this Man ! God has given us so many blessings and he will continue to do so ! I love you daddy 😘😘 enjoy your day Old man 👴🏾👴🏾