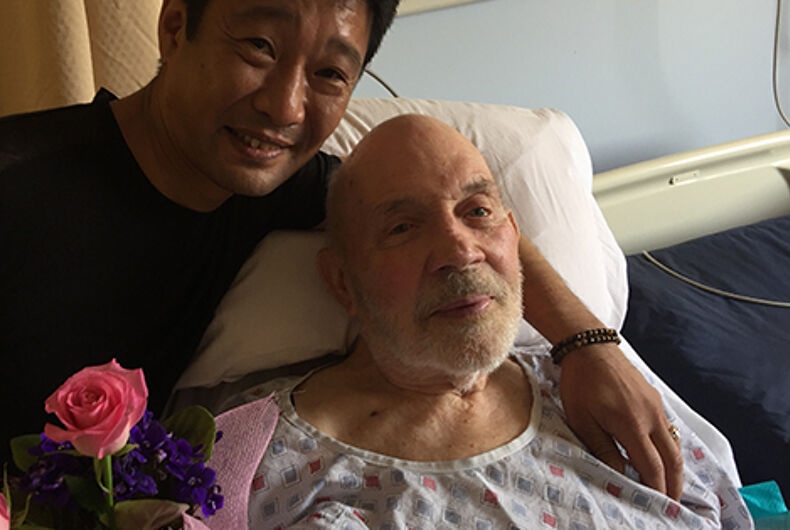 Theirs is a love story for the ages. It began at first sight and has lasted throughout the decades. It has now grown stronger, despite illness and distance.

“The second I saw Takashi I knew he and I would be together forever,” a teary-eyed Dale Green, an 85-year-old Korean War veteran told The Pride L.A.

“There wasn’t even a slight chance that we would not be. It was love at first sight and it was profound and mutual. We both knew that, then and there…and still,” he said.

Green and Takashi Nakaya, 53, met in Lima, Peru while working at a textile factory. The country was a hostile place at the time, engaged in a hostile conflict with rebels. It was also a less than welcoming environment for gay people. Green and Nakaya decided to move to Japan, after Nakaya was unable to get a visa to the United States.

The couple built a life together in Japan and from there traveled the world. Green was required to leave the country every few months in order to maintain his tourist visa. Japan does not offer much in the way of legal standing for same-sex relationships.

When Green suffered from what appeared to be a stroke, he was taken to a Japanese hospital, where he stayed for three weeks, without getting a thorough diagnosis. There were other issues as well.

“Japan has an incredibly complex medical system. With Dale, the complications quickly became extreme,” Nakaya said. “He could not overstay his visa. Veterans benefits, Social Security, and Medicare are essentially useless abroad. Even though there is a VA Hospital in Japan, Dale did not qualify for treatment there because he is not an active service-member. Foreigners are not allowed to stay in Japanese hospitals without private insurance for more than one month. Dale was in the hospital on a cash basis. We were looking at going broke within days.”

They left to return to the U.S. to seek care for Green at a Veterans Administration Hospital. He learned that he had stage 4 melanoma and that the prognosis for recovery was poor.

They had previously discussed taking a trip to the U.S. together to get married, but since as they understood it it would offer little benefit to them while living in Japan, they did not give it much thought. Besides, they already felt “married.” Family and friends knew of them as a committed couple.

Green was not aware that same-sex marriage had become law throughout the U.S.

“I never dreamed of such a thing,” he said when told. “The Supreme Court ruled that way? Well, that’s just astonishing. That’s something I’d want to do for Takashi,” he said.

Green is a lifelong Republican, and when told that Trump and the Republicans have promised to rescind marriage equality if they win in November, he said, “Neither is going to happen.”

The couple learned that there were indeed benefits to them getting married, such as surviving spousal benefits and legal protections that would be recognized by the U.S. even if their country of residency did not recognize them.

The pair were married in the hospital, which is perhaps the first time a same-sex marriage has occurred in a VA Hospital.

Dozens of staff members, including doctors, nurses, orderlies, secretaries, and social workers, were on hand to witness the union, performed by a notary.

When asked if he would take Nakaya to be his husband, Green said, “Yes, forever. Always.” When asked, “Do you promise to hold him from this day forward, for better, for worse, for richer for poorer, in sickness and in health, to love and to cherish, until you are parted by death?” Dale, gazing into Nakaya’s eyes, said, “I do. I do. I do. I love him. I do.”

When they were pronounced married the room erupted with cheers.

“For people to be accepting of us is one thing,” Takashi said with tears rolling down his face, “but to celebrate our love with us—total strangers—is something incredible.”

Nakaya had to return to Japan to tend to their home and his job, and Green was moved into the Intensive Care Unit and informed him that he was no longer able to tolerate cancer treatment. He asked that the “Do Not Resuscitate Order” he requested previously be removed so that he could be reunited with Nakaya.

They communicated daily via Skype until Nakaya was able to return to the U.S. to be reunited with Green.

After their story was featured, people from around the world offered their support and love. One person offered to procure a private jet to fly Green home if he was able to make the trip, while another offered them a home in Los Angeles. The VA Hospital offered Dale their “Wish” program and Nakaya a place to stay nearby.

“All I can say is wow! There are still good people in this world,” Nakaya said. “We are more than blessed and so very touched.”

Watch Green and Nakaya reunite in the video below.