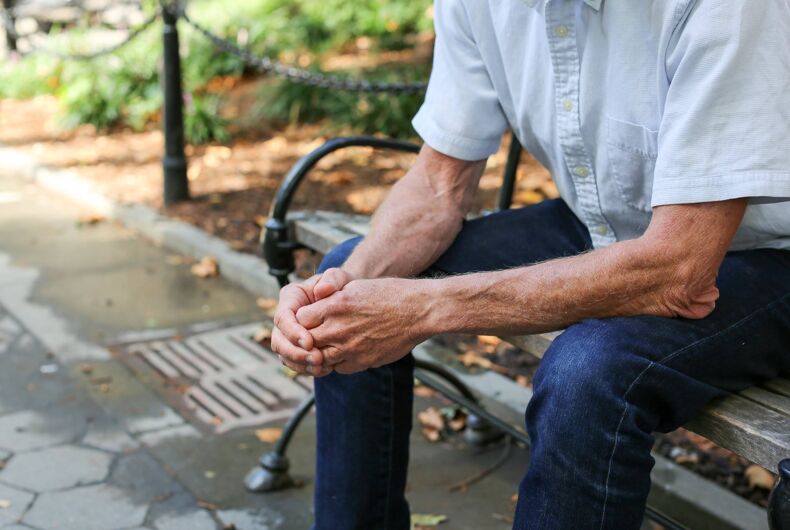 Another “Humans of New York” photo story is rocketing around the internet and this time the subject is a gay man with survivor’s guilt. While he is HIV+, his former lover died of complications from AIDS.

While the relationship ended decades ago, confesses he can’t get his former partner, Jack, out of his mind. He left Jack for a “gorgeous twenty-one year old” and while the two remained friends, things were never the same. Jack became infected by a later lover and guilt from the “what if” game is driving the subject to despair.

“Both of us got sick, but Jack was the one who died. And he might have lived if I hadn’t been such a bad person,” he says in the caption to the photo. “If he’d been ‘enough’ for me, he’d never have gotten HIV. The funny thing is– I’d grown up thinking that I’d never be loved. Then a wonderful person loved me. And I left him to have sex with somebody who wasn’t a wonderful person.”

“I dream about him almost every night. It always feels good to see him alive. For a moment, I don’t have to blame myself for his death.”

“It is important to remember that guilt is a common reaction to loss and it can ultimately be part of the healing process,” according to the Real Warriors Campaign, a public awareness campaign aimed at former military members suffering from Post Traumatic Stress Disorder (PTSD). “However, if it is not addressed, excessive guilt can lead to psychological health concerns, such as depression, apathy or generalized anxiety.”

Studies have shown that many gay men – both positive and negative – who lived through the AIDS epidemic of the 80s and 90s suffered from undiagnosed PTSD. A third of men currently living with HIV are thought to have the mental health disorder.

Read the entire story below.