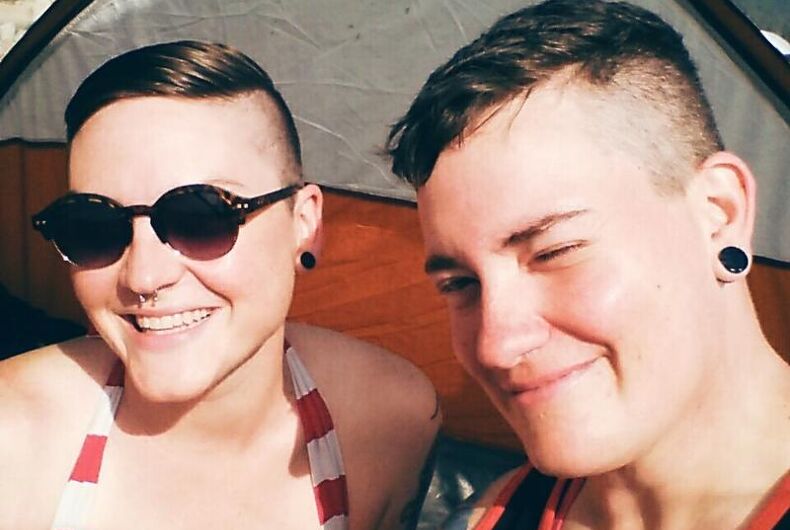 In late August, a Seattle couple was given a warning by security after kissing outside the stadium, KUOW reports. Mary McHale and Sara Hinton were told that their display of affection was against Safeco’s “family-friendly policy,” and that they would be asked to leave if it happened again.

“My sweetheart looked at me and said what a great time we were having, and we kissed. And just standing there, not doing anything obscene or anything that would make any of the other folks around us uncomfortable,” McHale told KUOW, “and that’s when a Safeco Field employee came out and said, ‘ladies, I’m gonna have to ask you to stop.’ And he said that our behavior was against a family-friendly policy, and that point I started to get really angry.”

The humiliation was made worse by the fact that the employee called the couple “ladies,” when neither of them uses feminine pronouns.

But the Mariners’ leadership has apologized, and told the couple that sensitivity training with the LGBT Chamber of Commerce will take place in September, before the end of the season.

Spokesperson Rebecca Hale sought to reassure the LGBTQ community that Mariners’ games are a welcoming place.

“I know that the actions of a few of our staff over the last few weeks have made folks in the community question that, and for that we are sincerely sorry,” she said. “And we have fans that are LGBTQ and we want them to know that they are most welcome here at Safeco Field.”

Those actions follow a similar incident just two weeks earlier, in which Safeco Field staff told a lesbian couple they had to stop being affectionate during a Mariners’ game.

Giuliana Garcia and Calista Nabors were watching the Mariners play the Anaheim Angels on August 5 when an usher said there’d been a complaint and that they needed to stop “being affectionate.” According to Outsports, the couple was told that their behavior violated the park’s code of conduct, which prohibits “displays of affection not appropriate in a public, family setting.”

The Mariners organization initially apologized, via a voicemail from Amy Swisher, senior manager of guest experience, who said:

I just want to apologize to you. We do have a code of conduct as far as what people are doing in the ballpark, but hugging and embracing is totally fine. And I’m kind of upset with my staff that they made an issue of it. I want you to know that we spoke with [the staff member who reprimanded you], and we’ve coached her on what violates our code of conduct and what doesn’t. She feels bad and I’m just kind of appalled by the whole situation. I’m so sorry for what you guys went through. This is not how we treat people. It goes against our beliefs and the Mariners way, and I am, like I said, very very sorry about it.

But after issuing that apology, the Mariners apparently changed their tune. Mariners spokesperson Rebecca Hale told Outsports that the couple was “making out” and that the usher was uncomfortable with it. Garcia said the couple only exchanged a quick kiss — nothing more than is commonly displayed on “kiss cams” between straight couples at sporting events across the country — and that the organization never suggested they had done anything wrong.

Garcia told Outsports she spoke out about the incident in the hopes it wouldn’t happen to someone else. But her experience wasn’t the first time a couple was reprimanded at a Mariners’ game for showing same-sex affection. It happened in 2008 as well.