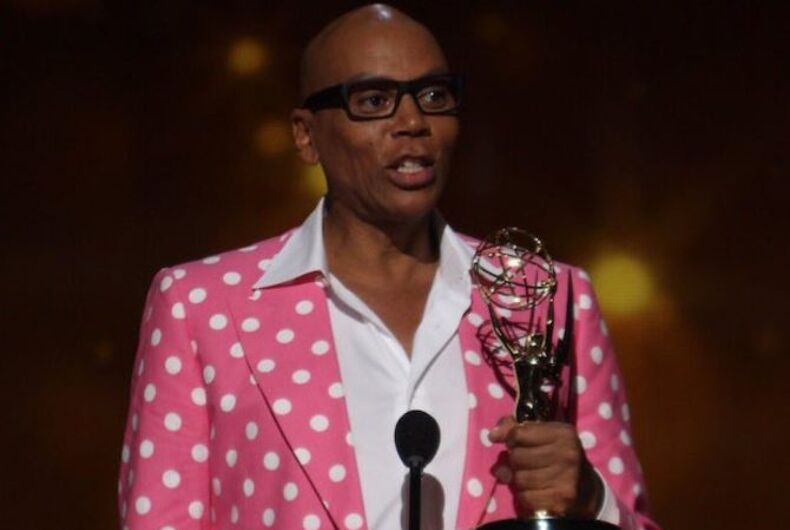 A big congrats to the drag mama herself, RuPaul, for winning his first ever Emmy award for Outstanding Host of a Variety, Nonfiction Or Reality Program.

The herstory was made on Sunday during night two of the Creative Arts Emmy Awards at the Microsoft Theatre in Los Angeles.

When the nominees were announced back in July, Ru sent out this dedication:

I dedicate this Emmy nomination to outsiders everywhere. Brave souls who stick to their dreams and make the world a more colorful place.

World of Wonder was quick to give a well-deserved shout out to their award winning hit program:

You better work! We are SO proud of you, @RuPaul for your #emmy win!!! CONDRAGULATIONS!!! pic.twitter.com/6Vkc2xFwBz

Fans of the show wasted no time offering their congratulations:

Condragulations @RuPaul! You made @TheEmmys herstory tonight! I'm thrilled for you!!!!!

OMG IM SO HAPPY FOR YOU @RuPaul pic.twitter.com/7KL9Ow60dd

Mazel Tov to the one and only @RuPaul on winning the Emmy!!!

Come through Mama @RuPaul! CONDRAGULATIONS ON YOUR EMMY! ❤️ pic.twitter.com/cK4E0ZhvMp

Congratulations @RuPaul on winning your first Emmy!!! It's about time! Welcome to the club 😘🍾

The main Primetime Emmy Awards ceremony will be held next Sunday, Sept. 18 at 8/7c on ABC.