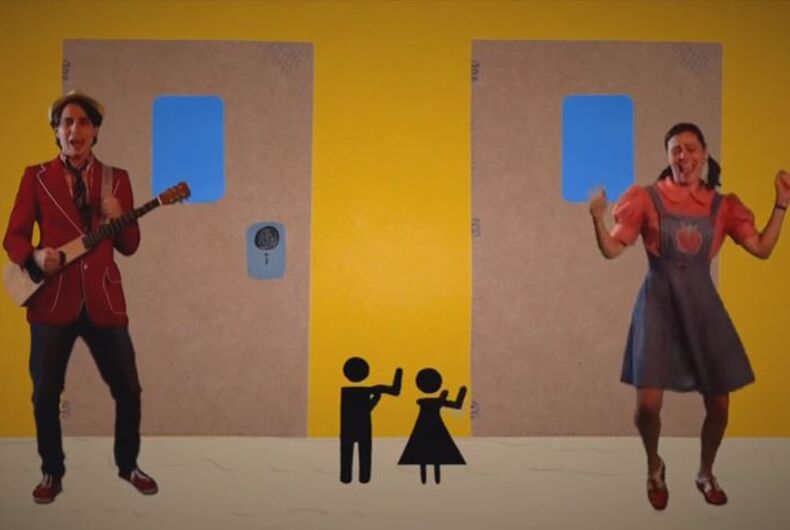 So much has been said about anti-trans bathroom bills, such as North Carolina’s HB2, it begins to feel like you cannot possibly hear a new word on the subject. Think again.

Children’s musician Mr. Loops, aka Jon Lewis, is out with a new song that aims to break the message down to its most simple and humane with the chorus:

The verses explore the concept more deeply, acknowledging it as a hot button issue with the lines, “All we gotta do is use our common sense and then/We can a problem while still remaining friends.”

It also reminds, “Porta Potties are a potty everybody shares/So are potties in our houses and nobody cares.”

Lewis says his friend shared a meme on Facebook that pointed out Porta Potties have been gender neutral all along and nobody has cared, which prompted him to respond with what would become the chorus of the song. He says when others said they found his take on it amusing, as well as simple yet effectively communicative, an idea was born.

“I immediately thought that it could be a Mr. Loops song,” he says. “I imagined kids and families singing it and laughing, all the while instilling a sense of acceptance and awareness to this ‘issue.’”

A conversation he overheard in a cafe reinforced his desire to record the song, which he says took about three months, including creating the animation and making the video – Lewis is also a filmmaker.

A customer called the waiter over and laughingly asked where the gender neutral bathroom was, he says.

“Out back in the alley,” Lewis remembers the waiter saying.

He hopes the song and accompanying video will help start a positive and empathetic dialogue. It is one many find difficult to have, especially with children.