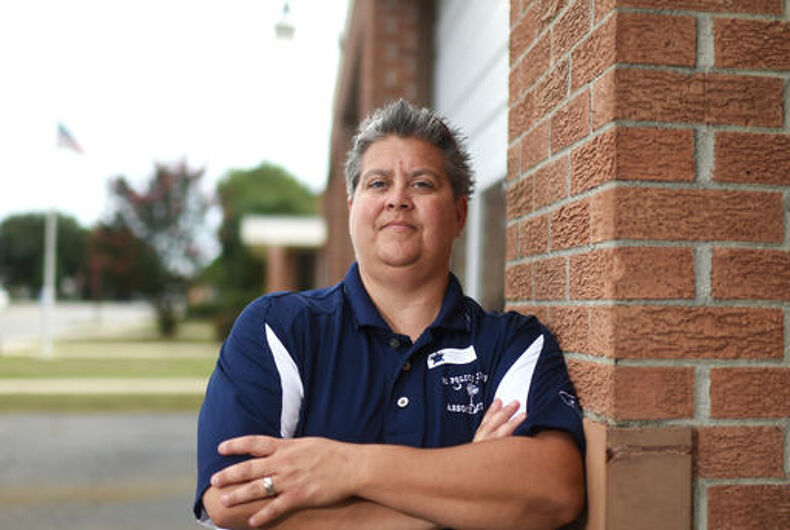 COLUMBIA, S.C. (AP) — Two years after a small South Carolina police chief was fired because she was gay, the same chief said her hometown fired her again in retaliation for having an outside agency investigate a sexual harassment complaint.

Latta Town Administrator Jarrett Taylor saved Crystal Moore’s job the first time. But he said he fired her Friday not to get revenge, but because she couldn’t solve growing problems with bad morale, poor decisions and administrative tasks that weren’t done on time.

When Moore was first fired in 2014, Latta rallied around her, stripped power from the mayor and cheered when Taylor and other Town Council members hired her back. This time, the dispute seems destined for a courtroom, even as Moore runs for a different job — Dillon County sheriff.

Moore’s lawyer said the problems only started Aug. 12, when a woman reported she was being sexually harassed by a male Latta employee.

Moore tried to call Taylor first as per town policy, but his voicemail was full so she decided to ask a sheriff’s deputy to come talk to the woman in part because she was related by marriage to the male employee, Moore’s lawyer Malissa Burnette told The Associated Press in an email.

Taylor then demanded Moore sign a statement saying the town employee meant no harm against the woman making the accusations. Moore refused because the woman told her she had reported the harassment to Taylor first and he did nothing. The town then issued four reprimands against her as retaliation, Burnette said.

Latta suspended Moore for five days last month, reprimanding her for failing to inform supervisors of a sexual harassment claim as soon as it was reported; revealing an officer’s salary at a public meeting; not filling out the required weekly reports on the condition of her department’s vehicles; and checking another employee’s disciplinary records without permission, according to the documents the town released to the AP.

Taylor, whose taping of Latta’s mayor saying he would rather have his grandchildren watched by a drunk than a gay person helped Moore get her job back in 2014, said Moore’s poor job performance was the only reason for her firing.

“It’s aggravating. I defended her so strongly a couple of years ago. I still stand by my actions then. But things have changed,” said Taylor, who also serves on the Town Council.

Burnette said Taylor is trying to cover up his own problems with the employee who no longer works for the town by firing Moore.

“Taylor did not conduct an immediate investigation or take appropriate action as required by law and policy, but instead protected the man, and the sexual harassment continued,” Burnette said.

Moore was fired Thursday, a day after Burnette told the town Moore was considering suing the town for forcing her to go through undue stress just as she was diagnosed and undergoing treatment for a cancerous tumor on her thumb.

“I’m seriously sorry this came at an inopportune time in her life,” Taylor said. “But at some point, the job has to be done right.”

The State Law Enforcement Division confirmed it is investigating a Latta employee, but under the agency’s policy, it could not confirm why, spokesman Thom Berry said. Burdette said it is the employee accused of harassment.

Moore posted on her Facebook page that she was shocked and angered by what happened in her hometown, an old tobacco hub of about 1,400 people just off Interstate 95.

“This won’t stop me from serving the people of Latta or Dillon County. This is a tough time for all of us, but I know justice will prevail,” Moore wrote.