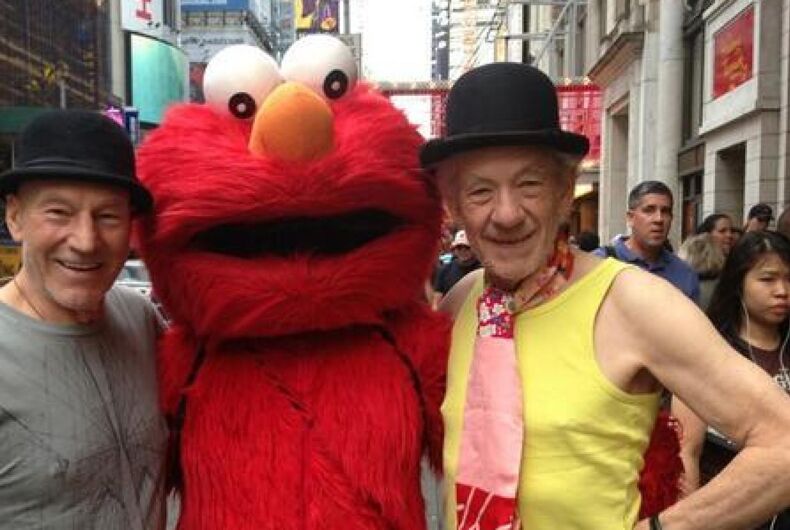 The London Standard‘s ES Magazine has published the gayest interview possible with actors Sirs Ian McKellen and Patrick Stewart. The two close friends have often been rumored to be a couple even though McKellen is gay and Stewart is straight and married.

The actors, both known for their strong and masculine roles on screen and in the theater, feel no challenge to their masculinity, however, and continuously play off the innuendos. They are openly affectionate to one another and banter back and forth like a married couple.

The interview is a profile of the two friends as they prepare for their new West End production of Harold Pinter’s No Man’s Land and highlights their unique chemistry. The two pat each other’s arms affectionately and “every now and then reaching between them to tenderly clasp one another’s hand in the way that couples do.”

“I know that I’m in a love affair with Ian,” Stewart say in the opening to the article.

“What I love about Patrick is that he’s so predictably myself. I think we are the same person. If Patrick comes into a rehearsal room and says, ‘Look, look…’ I know what it’s going to be about,” McKellen adds, tuning to Stewart to add, “So it’s actually because you’re a narcissist and who you’re in love with is yourself.”

The profile picks up on the camaraderie between the two and they unabashedly examine what it means to be, in essence, a nonsexual loving same-sex couple as older men comfortable with their sexualities. Too many people get hung up on the labels of “gay,” “straight,” or “bisexual,” instead of realizing that the basis of all great long-term relationships is friendship and chemistry.

Be sure to check out the full article to see a relationship we should all be so lucky to enjoy in our lifetime.

Was lesbian police chief fired for poor performance or as retaliation?