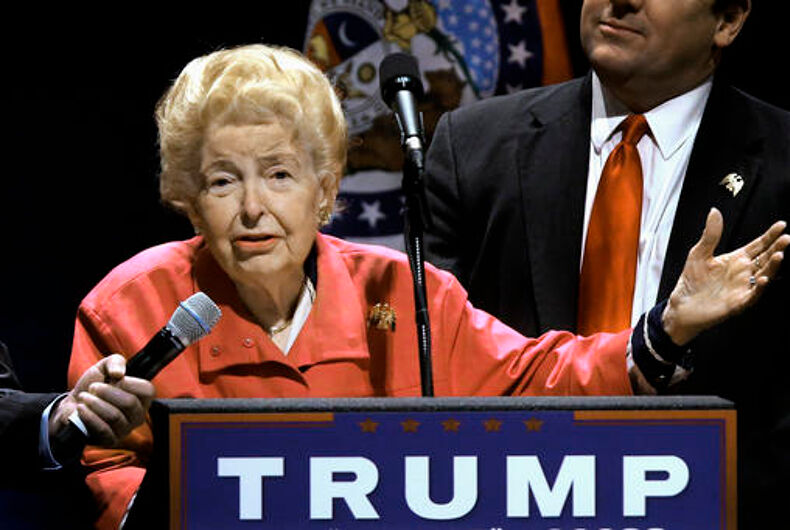 ST. LOUIS (AP) — Phyllis Schlafly, the outspoken conservative activist who helped defeat the Equal Rights Amendment in the 1970s and founded the Eagle Forum political group, has died. She was 92.

Schlafly’s family was with her when she died Monday afternoon of cancer at her home in St. Louis, her son John Schlafly said. Funeral arrangements are pending, he said.

Schlafly rose to national attention in 1964 with her self-published book, “A Choice Not an Echo,” that became a manifesto for the far right. The book, which sold three million copies, chronicled the history of the Republican National Convention and is credited for helping conservative Sen. Barry Goldwater of Arizona earn the 1964 GOP nomination.

She later helped lead efforts to defeat the proposed constitutional amendment that would have outlawed gender discrimination, galvanizing the party’s right. She’d graduated from college while working overnight at a factory during World War II, her newspaper column appeared in dozens of newspapers and she was politically active into her 90s — including attending every convention since her first in 1952. She attended this year’s convention as a Donald Trump delegate.

Yet she told The Associated Press in 2007 that perhaps her greatest legacy was the Eagle Forum, which she founded in 1972 in suburban St. Louis, where she lived. The ultraconservative group has chapters in several states and claims 80,000 members.

“I’ve taught literally millions of people how to participate in self-government,” Schlafly said. “I think I’ve built a wonderful organization of volunteers, mostly women but some men, willing to spend their time to get good laws and good politicians.”

The Eagle Forum pushes for low taxes, a strong military and English-only education. The group is against efforts it says are pushed by radical feminists or encroach on U.S. sovereignty, such as guest-worker visas, according to its website, which describes the Equal Rights Amendment as having had a “hidden agenda of tax-funded abortions and same-sex marriages.”

The group said in a statement on its website announcing Schlafly’s death that her “focus from her earliest days until her final ones was protecting the family, which she understood as the building block of life.”

As momentum grew in the 1970s for the Equal Rights Amendment, Schlafly became its most outspoken critic — and was vilified by its supporters. She had a pie smashed into her face and pig’s blood thrown on her, and feminist Betty Friedan once told Schlafly, “I’d like to burn you at the stake.” She was chastised in a 1970s “Doonesbury” — a framed copy of which hung on her office wall.

“What I am defending is the real rights of women,” Schlafly said at the time. “A woman should have the right to be in the home as a wife and mother.”

“They were never able to show women would get any benefit out of it,” she told the AP in 2007. “It (the U.S. Constitution) is already sex-neutral. Women already have all the rights that men have.”

There she is: Out of the closet, and ready for Miss America