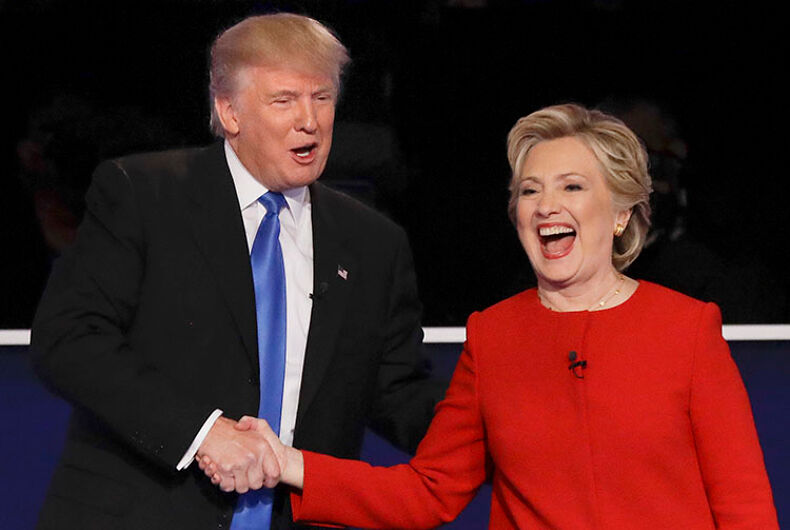 Donald Trump’s habit of peddling hype and fabrication emerged unabated in the first presidential debate while Hillary Clinton played it cautiously in her statements, though not without error. They both denied making statements that they are on the record as saying.

A look at some of the claims in the debate and how they compare with the facts:

TRUMP, denying Clinton’s accusation that he supported the Iraq war: “Wrong. Wrong.” Later: “That is a mainstream media nonsense put out by her. I was against the war in Iraq.”

THE FACTS: There is no evidence Trump expressed public opposition to the war before the U.S. invaded, despite his repeated insistence that he did. Rather, he offered lukewarm support. He only began to voice doubts about the conflict well after it began in March 2003.

His first known public comment on the topic came on Sept. 11, 2002, when he was asked whether he supported a potential Iraq invasion in an interview with radio host Howard Stern. “Yeah, I guess so,” Trump responded.

On March 21, 2003, just days after the invasion began, Trump said it “looks like a tremendous success from a military standpoint.”

CLINTON, denying Trump’s accusation that she called the Trans-Pacific Partnership trade deal the “gold standard” of trade agreements: “I did say I hoped it would be a good deal.”

THE FACTS: Trump is correct. As secretary of state, Clinton called the deal that was taking shape the “gold standard” of trade agreements, in a 2012 trip to Australia, and championed the agreement in other venues around the world. She did not merely express the hope it would turn out well.

Clinton flip-flopped into opposing the trade deal in the Democratic primary when facing Bernie Sanders, who was strongly opposed to it.

TRUMP, when Clinton accused him of calling climate change a hoax invented by the Chinese: “I did not say that.”

THE FACTS: Yes he did, in the form of a 2012 tweet: “The concept of global warming was created by and for the Chinese in order to make U.S. manufacturing non-competitive.” He later claimed he was kidding, but he’s also repeated the claim that climate change is a hoax, and one that benefits China.

He tweeted in January 2014: “Snowing in Texas and Louisiana, record setting freezing temperatures throughout the country and beyond. Global warming is an expensive hoax!”

LGBTQNation is your source for exclusive live debate coverage tonight