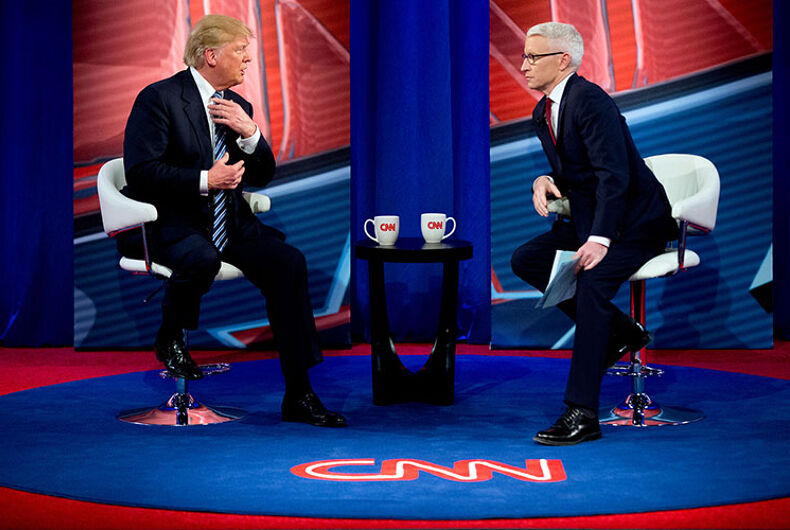 It’s less than a week to the first presidential debate and Donald Trump is already making excuses about how unfairly he expects to be treated by America’s most popular out anchorman.

CNN’s Anderson Cooper was selected by the nonpartisan Commission on Presidential Debates to co-moderate the second debate with ABC’s Martha Raddatz on October 9. NBC’s Lester Holt kicks off the series on September 26.

Trump complained to Fox News anchor Bill O’Reilly that he doesn’t expect to be treated fairly by either man, especially Cooper, who O’Reilly identified on his program as a registered Democrat.

TRUMP: “Look, it’s a phony system. Lester is a Democrat. I mean, they are all Democrats. Okay? It’s a very unfair system. I — look, I’ve worked pretty well within the system. I guess by a lot of polls I’m leading many of the polls, and most of the polls — CNN just came out with a poll I’m leading nationwide by two. I’m leading a lot of the states. I’m leading Florida where I am now by three or four. Something just came out. A poll just came out. I’m leading it by three points or four points. And, you know, I think I’m doing well. Leading Ohio, leading in North Carolina. I think we are doing very well.”

O’REILLY: “Alright, but after the debate things will change and you will see.”

O’REILLY: “Raddatz and Cooper, you OK with them, or no?”

TRUMP: “No, not really. I’m not okay with Anderson Cooper because I think he treats me very unfairly at CNN. I think he is very unfair on CNN. I think CNN, they call it the Clinton News Network that’s why the ratings aren’t doing very well.”

Watch Trump and O’Reilly discuss the debates on Fox News below.