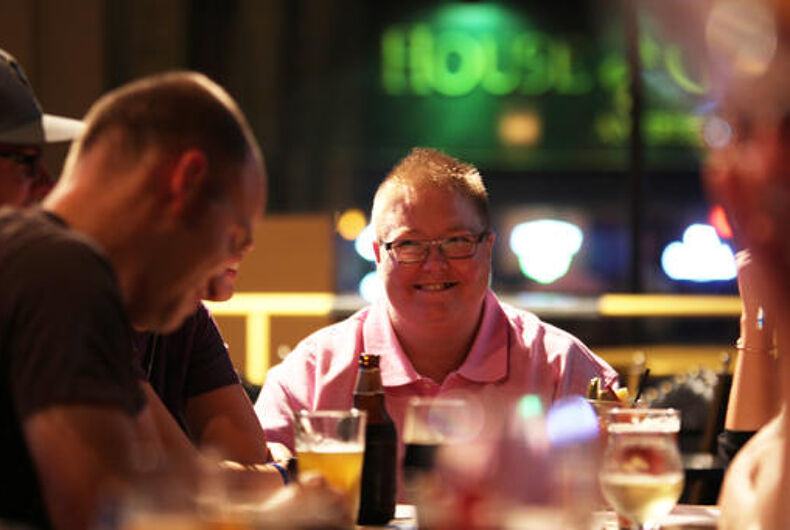 In this Tuesday, Sept. 13, 2016 photo, Angela Caddell smiles during a "Jesus & Beer" event at a Waukesha, Wis., pub, organized by CollectiveMKE church, which doesn't have a traditional building. The group holds these discussions once a month at Milwaukee and Waukesha bars. It's part of an effort by religious groups nationwide looking for ways to recruit new parishioners, connect with people struggling with their faith or give a different, relaxed outlet to talk religion. Photo: (AP Photo/Carrie Antlfinger)

WAUKESHA, Wis. (AP) — Angela Caddell started struggling with her Christianity 14 years ago when she came out as gay. But a gathering at a bar to talk faith over a cold beer once a month is helping her feel more connected to her religion.

“If you’re an atheist you are welcome. …. I’m a lesbian, I’m totally welcome,” said the 32-year-old from nearby Wauwatosa, Wisconsin, at a recent gathering.

This event is called “Jesus & Beer” and it’s part of an effort by some Christian groups throughout the country to recruit parishioners, connect with people struggling with faith or provide a relaxed outlet to talk religion.

Caddell heard about the event through Brandon Brown, pastor at CollectiveMKE. He started the gatherings once a month at area bars about 1½ years ago. He doesn’t have a stand-alone church and knew that his non-traditional gatherings wouldn’t attract social conservatives. About two dozen people attend.

“I think it also completely unsettles everyone’s expectations in that they know what it is to talk about their faith in a church but most people have never done it in a bar so it’s a totally new environment and maybe fresh,” Brown said. “In addition to that, I’ll be honest: a beer or two doesn’t hurt the conversation at all.”

While bringing people together to throw one back and talk religion isn’t a new idea, groups have been turning to the non-traditional pub setting to attract younger people such as millennials. According to a Pew Research Center study, the number of U.S. adults who are affiliated with an organized religion dropped from 83 percent in 2007 to 77 percent in 2014, a trend particularly striking in the millennial generation.

That younger group is the focus of a monthly bar event organized by the Basilica of St. Josaphat in Milwaukee, said Emily Burds, the Catholic church’s Director of Evangelization. Besides a free beer, there’s usually a meet and greet, a speaker and discussion.

About 60 to 70 people come each month to the “Brewing the Faith” gatherings, which Burds sees as a “means to an end.”

“Obviously the end is like greater faith and a relationship with God but also to be connected to a parish community somewhere where they are living,” Burds said.

During the summer they also organize “Theology on Tap,” a lecture series that has spread worldwide after starting with the Archdioceses of Chicago in 1981. It involves bars or restaurants and targets younger people.

Burds said they trained some young adults in mingling skills to make sure everyone feels welcome and a sense of belonging — “what every millennial really is searching for,” Burds said.

It worked for James Wronski, 22, a new Milwaukee resident who attended a beer garden event.

“I think this kind of relaxed social atmosphere where you come, you meet people, you drink, you relax and you kind of learn and educate yourself, that’s a big draw to millennials.”

But alcohol certainly isn’t new to Catholicism, with wine being an integral part of the sacrament of Holy Communion, said Rev. John Laurance, associate professor of theology at Marquette University.

“You know one of the Psalms says, ‘God gave wine to cheer up people’s hearts,’ so even the prayer book of the Old Testament sees that this is a gift from God,” Laurance said.

© 2016, Associated Press, All Rights Reserved.
This material may not be published, broadcast, rewritten, or redistributed.
News (USA)
Coming Out, LGBTQ Christians