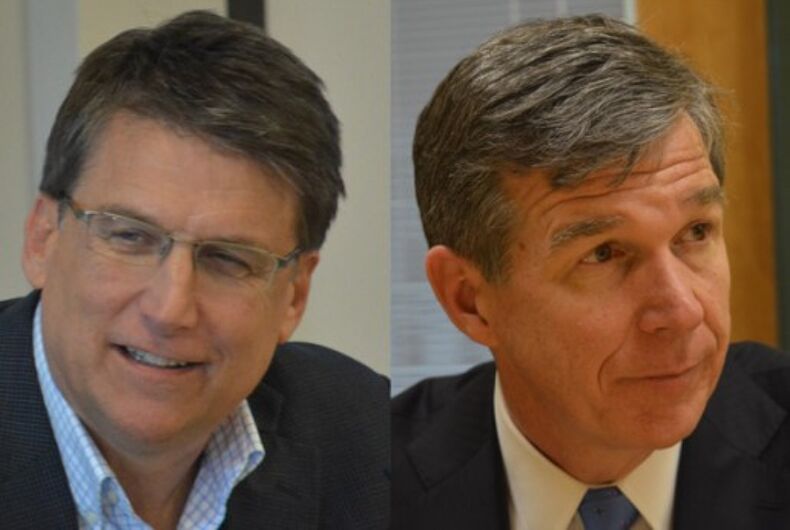 RALEIGH, N.C. (AP) — Gov. Pat McCrory frames the debate over North Carolina’s law about transgender people and restrooms as one of common sense and safety and privacy. Yet try as he might, he can’t shake the narrative from the law’s opponents of bigotry and intolerance.

The NCAA and Atlantic Coast Conference delivered the latest blows this week, stripping the state of lucrative championships and leaving the Republican with another bruise as he fights for his political life. Entering the final weeks of the nation’s most closely watched governor’s race, McCrory is trying to reset the focus for voters.

“When we were raising the average teacher pay, creating new jobs and cutting taxes, other folks were actually pushing to make our schools allow boys to use the girls’ locker rooms and showers,” McCrory says in a recent television ad. “Are we really talking about this?”

If McCrory wins re-election, it will be in face of some of America’s biggest household names: Apple, Google and Facebook have all come out against the law, while PayPal canceled a planned expansion in McCrory’s hometown of Charlotte because of it. The NBA moved its 2017 All-Star game out of Charlotte, and entertainers such as Bruce Springsteen, Pearl Jam and Ringo Starr have canceled shows in North Carolina.

It’s unclear whether the law is actually costing McCrory supporters, but the economic hits keep playing into the hands of Democratic challenger Attorney General Roy Cooper, who wants the law repealed. Polls have shown McCrory even with or trailing Cooper.

“This governor’s election is going to say a lot about our state and who we are,” Cooper said this week on a Raleigh sports radio show. “I think it’s time to show the country and the rest of the world who we really are. This is hurting us and it’s got to stop.”

The law, known as House Bill 2, was approved by the GOP-led legislature in March in response to Charlotte’s approval of an anti-discrimination ordinance for lesbian, gay, bisexual and transgender people at hotels, restaurants and retailers. McCrory and lawmakers had sought to counter the actions in Charlotte, where he was mayor for 14 years.

The law canceled the ordinance, prevented other local governments from passing similar laws and directed transgender people to use restroom and locker rooms in schools and government buildings corresponding to the sex on their birth certificate.

The NCAA and ACC punishments could make it harder for moderate voters McCrory relied on in 2012 to keep supporting him, said Michael Bitzer, a political science professor at Catawba College.

The ACC action, coming two days after the NCAA withdrawal, could be more acute. Four North Carolina schools play in the league, headquartered in Greensboro since it was founded in 1953.

“It’s one thing for Bruce Springsteen to pull concerts and for PayPal to pull jobs,” Bitzer said, but “when you’re talking about the heart of a sports conference in a state with such loyalty that’s a real punch in the gut about this policy decision, and who’s to be held responsible for it.”

“I don’t think it is going to influence a lot of votes,” Wrenn said.

McCrory and his allies blame the Human Rights Campaign, the “sports and entertainment elite” and Democrats for conspiring to make an example out of North Carolina on LGBT rights. This continued Tuesday when McCrory called the NCAA a “multi-billion dollar, tax-exempt monopoly,” while criticizing its decision to pull out events.

The ACC Council of Presidents followed the NCAA’s lead, voting Wednesday to relocate the league’s championships until North Carolina repeals the law. The decision includes 10 neutral site championships this academic school year, which means relocating the ACC football title game that was scheduled to be played in Charlotte in December.

“The decision to move the neutral site championships out of North Carolina while HB2 remains the law was not an easy one,” said Clemson President James Clements, chairman of the league’s council. “But it is consistent with the shared values of inclusion and non-discrimination at all our institutions.”