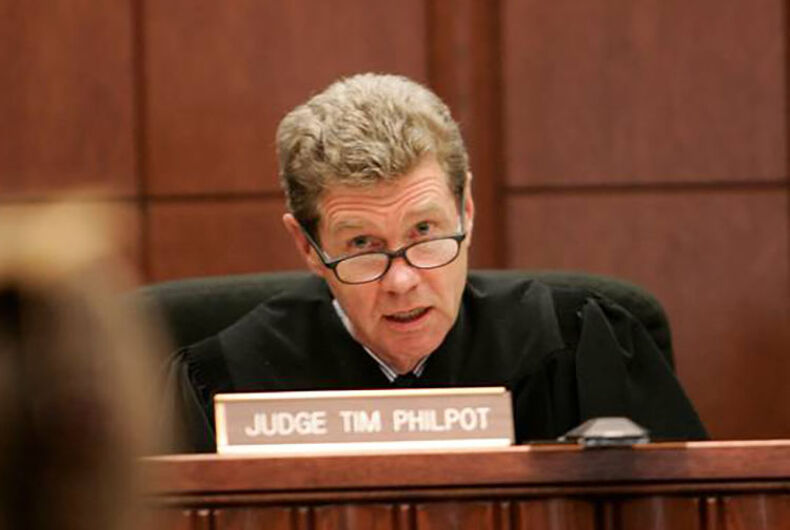 Kentucky gay couples seeking to adopt should know what they’re in for if their judge is Fayette Circuit Court Judge Tim Philpot, who told a religious gathering gay relationships are “sterile” and “just entertainment.”

Philpot told the staunchly conservative religious group, the Francis Asbury Society in Wilmore, Ky., on Sept. 8th, that about half of the adoptions he oversees involve gay couples, “who are not bad people.”

But the Supreme Court decision last year, legalizing same-sex marriage, was “pretty close to insane,” he said, and declared that “there is no question that polygamy is on the way.”

And he was just getting warmed up, according to USA Today:

Marriage equality, Philpot said in his 25 minute talk, is as illogical as the oxymoron “jumbo shrimp,” or “kind of like a dog show I was watching a few years ago where the announcer said that was a magnificent Chihuahua. Those words don’t make sense to me.”

Philpot said his “biggest bugaboo with the whole thing” is its heretofore unknown impact on straight men.

“I meet with men four or five times a week and we hug; we love each other at a certain level,” he said, speaking of a Christian ministry he runs. “I don’t hug the way I used to.”

Philpot said that he was at a Starbucks “when it really hit me like a ton of bricks. There was a man there, probably 45 years old. He had his arm around a young man who was about 20, and I would say there was a 90 percent chance it was just a father and son, but I had this moment when I thought – hmmm – I wonder what’s going on. They’re getting a little too close. They are making me uncomfortable.”

“Homosexual sin” is worse, he said, than “heterosexual sin,” because of the millions of children straight couples “bring into this world who are neglected and abused by parents who don’t care.”

Perhaps the worst offense, to Philpot, is that the LGBTQ community had “stolen” the rainbow, calling it one of the Bible’s greatest symbols, and one he was going to “take back:”

“I’m gonna put one on the back of my car because I’m not going to let them steal it,” he said. “I’m gonna take it back. I’m gonna drive around town with my rainbow and my 8-pound shorky and let them think what they want.”

Evangelicals ‘lay hands’ on Trump to ward off ‘Satanic attack’