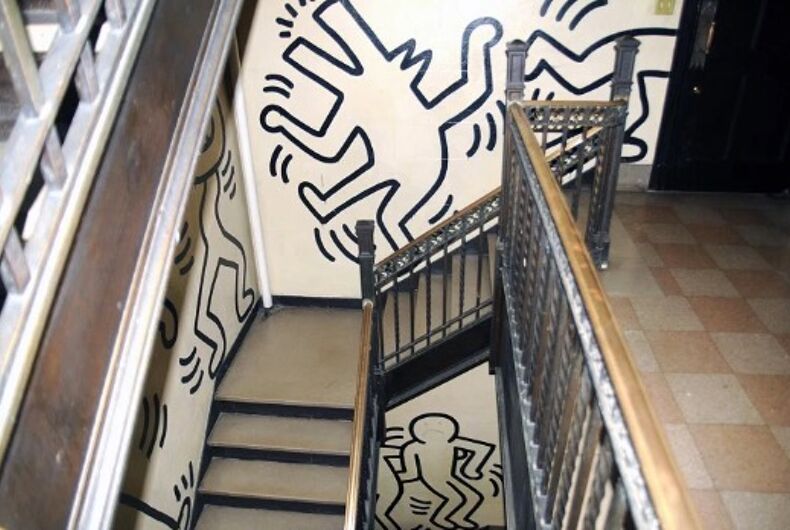 Keith Haring murals adorn the walls of this W 108th Street property that could be turned into condos by a developer.

In 2016, New York City is simply a much more expensive and claustrophobic version of everywhere else: a mindless expanse of TD Banks, 7/11s, Subway Sandwich shops, CVS pharmacies, Chipotle’s, Taco Bell/Pizza Hut combos, and the occasional Starbucks, just to keep things from becoming a faceless monoculture.

Further evidence that the city is intent on shaking off any sign of personality that could distinguish it from, say, a strip mall in Terre Haute, Indiana: An original Keith Haring mural from the early ’80s, which winds through the stairwells of a rental house in Morningside, is quite likely to be painted over in a bid to entice more monied tenants into the building.

As DNA info reports, the space was once home to a Catholic youth organization known as Grace House, but in more recent years, it’s become a system of single-room occupancy studio apartments with shared bathrooms and kitchens, which is still owed by the church.

Four months ago, the church abruptly asked all the tenants to leave by August 1, claiming they’ve been suffering from financial problems and need to find an alternative use for the building.

That means the fate of the Keith Haring mural is up in the air — as is that of the tenants, who are each scrambling to find new living situations.

“It’s a unique structure,” 62-year-old tenant Denis McFarling tells DNA info. “It would be a shame to see it turned into soulless condos.”

Not that “shame” is an emotion that occurs in your average New York developer. And plenty of tenants say they’ve seen them come by to examine the property.

Because the building consists of 14 SRO units and a solitary one-bedroom, tenants suspect these developers will gut the entire building in order to turn it into yet another generically swank, cream-colored condo monstrosity; an architectural celebration of the death of imagination.

So what will happen to all the original Haring artwork?

“No one seems to know what will happen to it,” says Robert Savina, a film production designer who’s occupied one of the studios since May 2015, paying “only” $900 a month. “There seems to have been no provisions made. I fell in love with the community here. And the mural, it’s part of our identities.”

Maybe before taking a wrecking ball to the building, the church can simply remove huge swaths of the mural and sell them all to the highest bidder.

More photos of the mural on the next page.