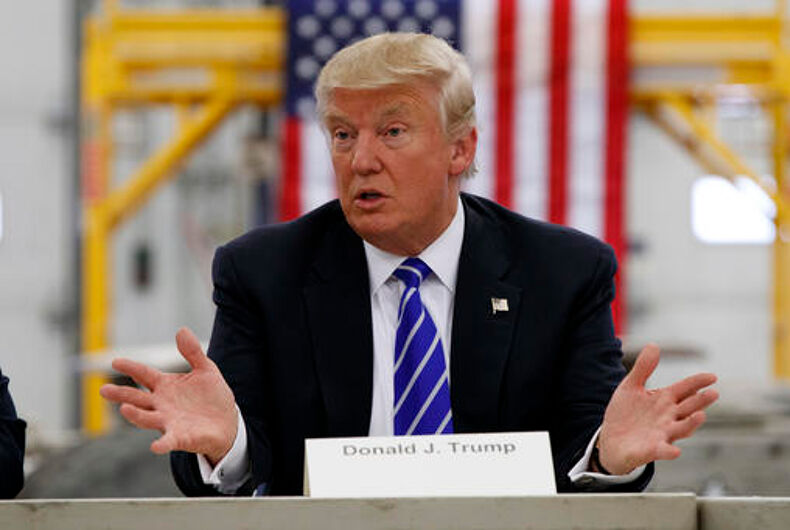 JERSEY CITY, N.J. (AP) — Donald Trump on Monday will call for a new ideological test for admission to the United States, vetting applicants on their stance on issues like religious freedom, gender equality and LGBT rights. The policy would represent a significant shift in how the U.S. manages entry into the country.

In a speech in swing state Ohio, Trump will also call for “foreign policy realism” and an end to nation-building if elected president. And he’ll argue that the United States needs to work with anyone who shares the mission of destroying the Islamic State group and other extremist organizations, regardless of other disagreements.

“Mr. Trump’s speech will explain that while we can’t choose our friends, we must always recognize our enemies,” Trump senior policy adviser Stephen Miller said.

The Republican nominee’s foreign policy address comes during a rocky stretch for his campaign. He’s struggled to stay on message and has consistently overshadowed his policy rollouts, including an economic speech last week, with provocative statements, including falsely declaring that President Barack Obama was the “founder” of the Islamic State.

Democrat Hillary Clinton has spent the summer hammering Trump as unfit to serve as commander in chief. She’s been bolstered by a steady stream of Republican national security experts who argue the billionaire businessman lacks the temperament and knowledge of world affairs to be president.

Clinton is focusing on domestic themes Monday as she campaigns in Pennsylvania with Vice President Joe Biden.

Trump is expected to spend significant time in his speech going after Obama and Clinton, the former secretary of state, blaming them for policies he argues allowed the Islamic State group to spread.

Trump is expected to say that any country that wants to work with the U.S. to defeat “radical Islamic terrorism” will be a U.S. ally — though aides did not specify which countries that position refers to. He’ll also call for declaring in explicit terms that, like during the Cold War, the U.S. is in an ideological conflict with radical Islam.

Will developers destroy a Keith Haring mural to make way for condos?