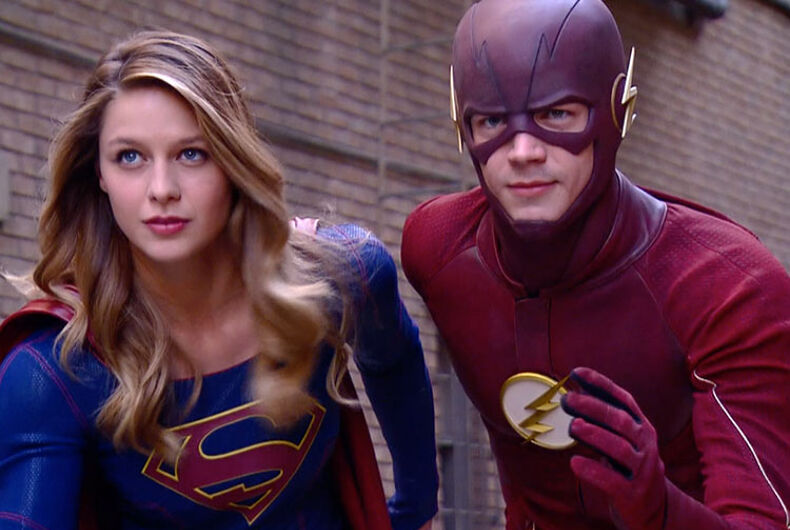 Sure, she can leap tall buildings in a single bound, but can the red-caped woman joining the CW’s superhero lineup sing?

A musical cross-over episode with The Flash is in Supergirl’s future, and that’s not the only surprise the show’s producers have in store for fans. One character is going to come out as gay.

“It is a significant character, we’re not trying to be coy about it,” said the CW’s Greg Berlanti at the Television Critics Association Press Tour.

“The only reason we [don’t want to say who] is we really want the audience to enjoy the character development and not necessarily be ahead of the storyline,” Berlanti said, according to E!

“I think it’s important that people know we want to include a character who happens to be gay in the show. We had a character who we discussed that as a possibility last year internally, and it didn’t materialise.

“So this year, when we were planning this season, we said to the network and studio that it was a priority for us. And everyone was cool with it.”

Also new this season is the appearance of Superman, Supergirl’s cousin, and not just hinted at, but played by Tyler Hoechlin who is guest starring in the role. Other CW characters such as Arrow and the team from Legends of Tomorrow are expected to be featured in the cross-over.

But what’s all this talk about a musical?

“There will be a musical crossover,” Berlanti told reporters. “There’s going to be a musical pair of episodes in the back half of the year between Supergirl and Flash. We have a number of people who can sing from all shows making appearances.”

The CW exec suggested fans might expect something akin to how Buffy the Vampire Slayer and Scrubs incorporated musical elements, by working the music directly into the plot.

“My sense is we’ll be very careful about how it is they’ll break into song. There’ll probably be an element of being inside a character’s head sometimes.

“It’s many episodes away but we are going to start combing through the music and talking about the possibilities. Victor [Garber, who appears on The Flash] was pitching me some songs the other night at dinner.”

So what songs? “We have been talking about trying to write at least one original song per episode, and certainly happy to take requests throughout the year,” Berlanti said, adding: “I think they’re going to be mostly pre-existing songs.”

Post your suggestions for Supergirl songs in the comments below!