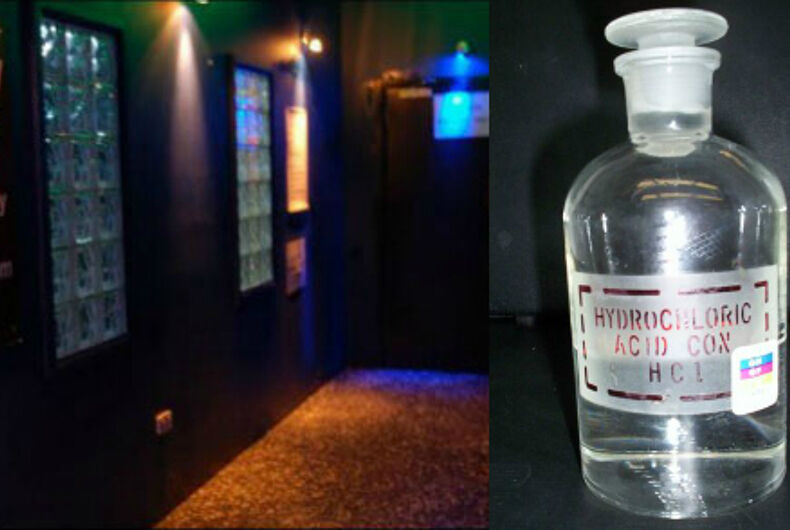 Police say an alarm sounded when a man tried to replace lubricant with acid at a Sydney sex club.Photo: Aarows / Wikipedia

A Sydney man faces accusations he put hydrochloric acid in the lubricant dispenser at a sex club for gay and bisexual people, the Sydney Morning Herald reports.

The 62-year-old was apprehended after triggering an alarm on the lube dispenser at Arrows, which describes itself as “Sydney’s premier health, recreation & social centre where safe sex is permitted regardless of gender.” He has been charged with administering poison intending to injure or cause distress or pain, among other offenses.

No injuries have been reported so far. Hydrochloric acid is a clear, pungent, and highly corrosive chemical that can cause irreversible damage to respiratory organs, eyes, skin, and intestines.

The alarm was installed after other recent attempts to tamper with the dispenser. According to the Morning Herald, this isn’t the first time the club has been targeted:

Aarows has previously made headlines over an attempted shooting murder in the carpark of the club in 2013.

Notorious extremist Milad Bin Ahmad-Shah Al-Ahmadzai and another man tried to kill Michael Rooke, who miraculously survived despite being hit in the ankle, torso, groin, liver and lungs.

Shocking CCTV footage depicted a wounded Mr Rooke scrambling to get away and desperately trying to yank open the door to Aarows to escape.

The suspect in the acid case is expected to appear in court on September 20.