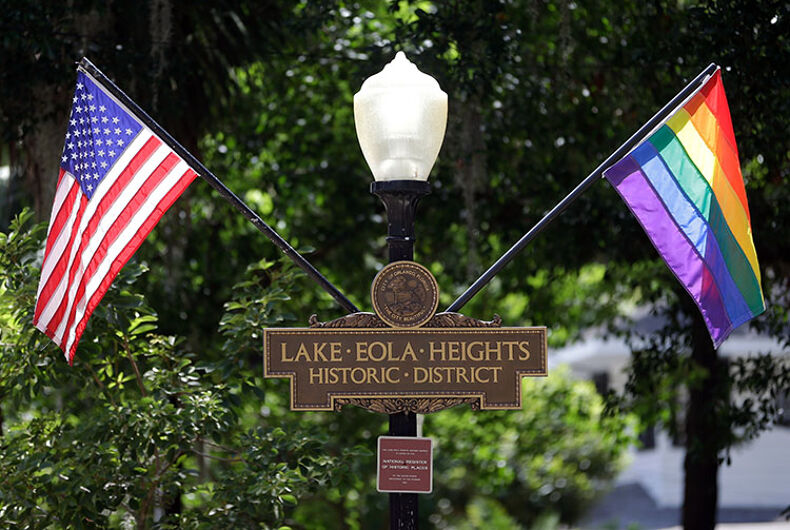 Two months after the massacre at a gay Orlando nightclub, residents say this city of newcomers is bonding in unprecedented solidarity, upending an old adage attributed to a former governor: “Florida isn’t so much a community as a crowd.”

Elements that often unite communities — sports teams, food culture, generations of residents living in the same neighborhood — are young or nonexistent in Orlando, where nearly two-thirds of all residents were born out of state. Many say Orlando’s modern existence dates back only 45 years, to Walt Disney World’s opening.

Now, the rainbow flag associated with gay pride seems to have become the Orlando area’s unofficial symbol. It sits beside an American flag and a Florida flag at City Hall. It’s emblazoned on stickers at hipster bars downtown and at boutiques and bistros on tony Park Avenue in the suburb Winter Park.

Rainbow colors have lit up downtown buildings, bridge spans and the iconic Lake Eola fountain in the heart of the city. Stores are selling out of “#OrlandoUnited” T-shirts with rainbow colors in a heart shape.

As many as 50,000 people showed up for a vigil after the June 12 Pulse nightclub shooting. More than $23 million has been raised for the victims, some of it from fundraisers at local yoga studios, restaurants, and roller skating rinks. Hundreds, if not thousands, of donors waited in long lines to give blood after the shooting. And a steady stream of residents place flowers, cards and stuffed animals at a makeshift memorial outside the club.

“Pulse is a shared experience that I’ve had so many people, after it, say something along the lines of ‘I now truly consider Orlando my home. I always thought of myself as being from Pittsburgh,'” Mayor Buddy Dyer said.

The collective mourning has tightened Orlando bonds and created a true sense of community, according to residents, elected leaders and business owners.

“The way our community has come together is monumental,” said Pulse owner Barbara Poma, who is still deciding the future of the now-closed nightclub. “We’re more than a crowd.”

Texas school rules transgender girl will have to use boys’ bathroom