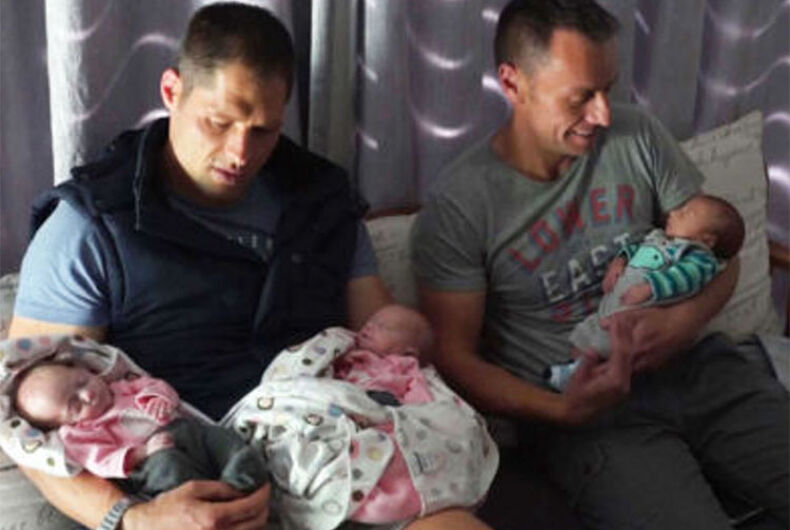 A gay couple in South Africa have finally brought home their children after more than three weeks in a hospital’s neo-natal unit, where a woman delivered what could be the world’s first triplets born to a surrogate for a gay couple.

Joshua and his twin sisters Zoe and Kate were born July 2, nine weeks early, and since then have received round-the-clock care at their hospital in Johannesburg.

In addition to their potentially history-making birth, the triplets share something else unique. All three are related to their fathers, both of whom contributed DNA to be used by the fertility clinic to impregnate the surrogate mother.

As Gay Star News reports, the babies and their dads have Oscar Pistorius to thank. Christo and Theo Menelaou were neighbors and friends of the Paralympian in Pretoria, and met during his 2014 murder trial, when Pistorius’s neighbors got together to console one another. Eventually the two got together. What’s more, GSN reports they also met their surrogate during the trial when one of the key state witnesses introduced them.

All three were born via Cesearan. Joshua was first, at 4 lbs., then Zoe, weighing 3.1 lbs., and Kate was just 2.9 lbs. Joshua was fewer than 16 inches long and yet was the biggest of the triplets.

But to Christo Menealou, they are each a miracle. “When you are gay, there is always the thought that it just may not be possible to be a parent no matter how much you would love to be,” Menelaou told Sky News.

“It’s very hard to be accepted for adoption and we were told we would always come after heterosexual couples. And then we just never thought we’d ever find a person who would want to be surrogate to a gay couple.”

Watch video of the couple and their children at SkyNews, and see more photos below.

Target boycott organizer: ‘we will not be able to go to the bathroom’