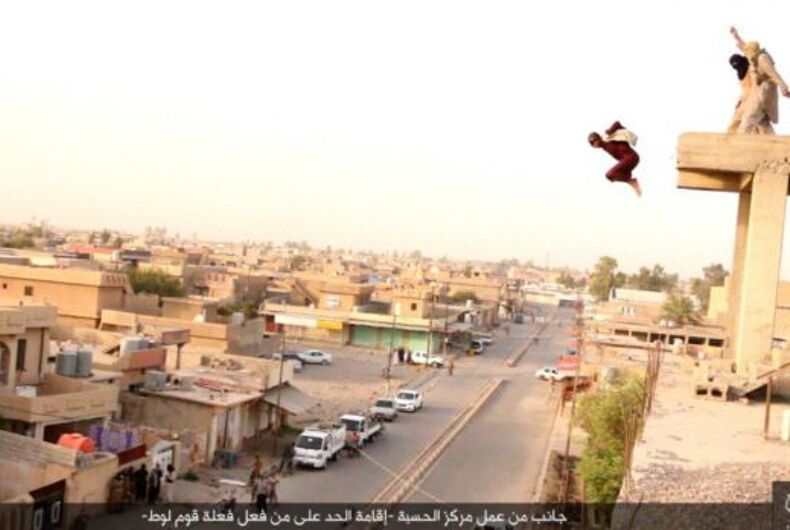 Image released by ISIS showing a man being executed for allegedly being a homosexual.Photo: ISIS via ARA News

The terrorist group ISIS is crowing that they allegedly executed another gay person. The young man was thrown off the roof of a tall building before his lifeless body was stoned by residents of the northern Iraqi city of Kirkuk.

“He was thrown off a roof in front of dozens of people,” a local activist told ARA News, speaking on condition of anonymity. “Then ISIS militants called on the people to stone the victim although he was already dead. They started to barbarically stone his corpse.”

Video footage released by the group shows two masked men throwing the man to his death. The graphic video also shows people dutifully stoning the man’s body after he fell. LGBTQNation has decided not to share the video.

“Civilians who live under ISIS suppression are forced to follow any order by the group, otherwise they could get killed,” Raafat al-Zarari said. “People sometimes have no choice but showing loyalty to ISIS. It’s a bitter reality in territories held by this terror group.”

The terrorist group has reportedly executed dozens of gay men, but it should be noted that they also routinely accuse political rivals and activists of being gay as a pretext to shame and kill them.