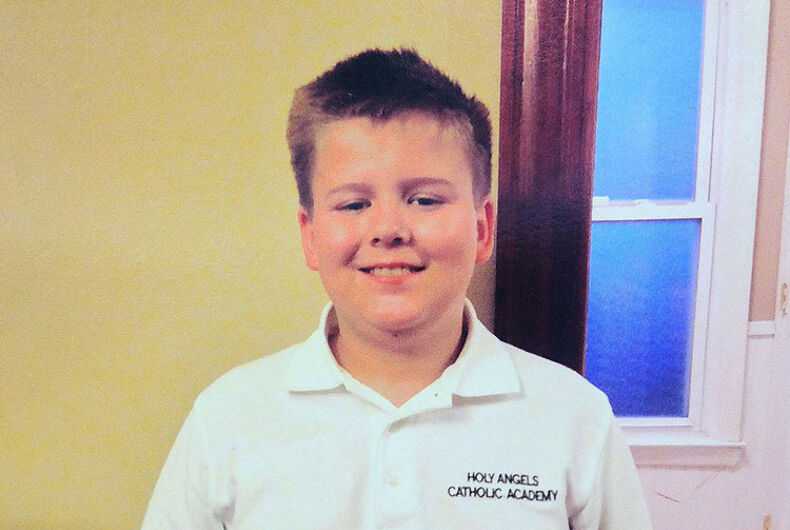 Danny Fitzpatrick of Staten Island, N.Y., was so fed up with taunts, humiliation, and abuse from a group of school bullies from his private Catholic school, he took a belt and hanged himself in his attic on August 11. He was 13.

Although no media reports or family members identified Fitzpatrick as LGBTQ, his 17-year-old sister told the New York Daily News he was ostracized.

“Danny was always left out,” said Kristen Fitzpatrick, who previously attended the same school, Holy Angels Catholic Academy in Bay Ridge, Brooklyn. “He used to come up to me and ask me to get kids to play with him. The other kids would say they thought he was weird.”

Her brother reportedly had been mercilessly bullied over his weight, and he wrote in a suicide note that the boys he thought were his friends and the teachers he turned to had “failed” him. And that ultimately, he felt as though he failed, too.

“I gave up,” Fitzpatrick wrote on a looseleaf paper, a month prior to his death. “The teachers . . . they didn’t do anything,” he wrote, adding that even the principal would not intervene.

Daniel Fitzpatrick, the boy’s father, posted an emotional video to Facebook in which he bared his grief, and mourned his son, whom he called “a kind, gentle soul.”

ISIS allegedly kills another gay man by throwing him off roof