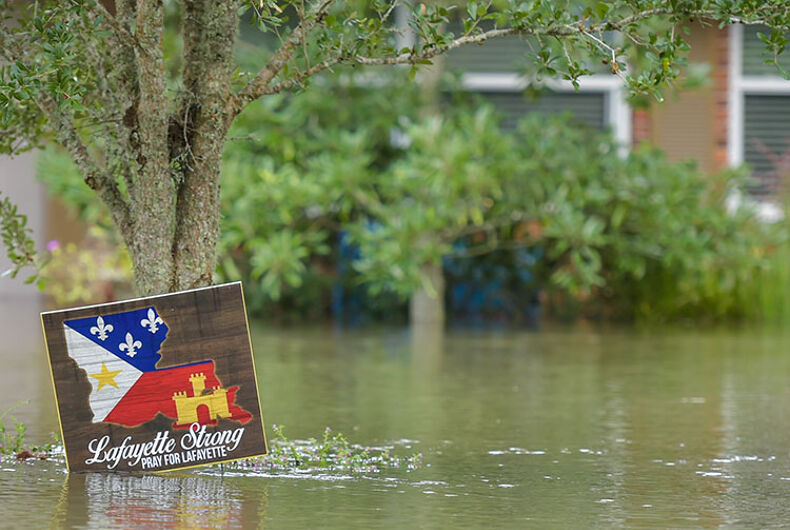 Tony Perkins used a canoe to escape what he called a “flood of biblical proportions” that has devastated Louisiana. The toll since Friday: 13 people dead, 8,400 forced to retreat to shelters, 30,000 rescued, and 40,000 homes damaged or destroyed.

Plus, one antigay, homophobic president of the Family Research Council and his family.

The Perkins clan was displaced by a natural disaster — or in his own words, an act of God — that heavily damaged his home, as well as Greenwell Springs Baptist Church, where he is the interim pastor, as The New Civil Rights Movement reported.

The man who has linked these kinds of catastrophies to an almighty being is himself at a loss for answers, he said.

“We’re gonna look for what God’s gonna do in this,” Perkins told FRC’s Washington Watch radio show. “I’m asking those questions and I’m going to see.”

Perkins posted a photo of his home on Facebook:

Although he is on a previously-scheduled vacation, Perkins called in to his own radio show Wednesday, to talk with guest host former Family Research Council vice president Ken Klukowski, who now works for Breitbart.

The FRC leader said his family of seven piled into a canoe and fled their home as ten-foot-high floodwaters rose in their driveway. But like Joseph and Mary in the Nativity story, Perkins and his flock were turned away from the shelter they sought. That’s when a former member of their church took them in, “in God’s provision.”

As Joe.My.God reported, Perkins told listeners his family will live in a camper for the six months he said it will take to rebuild his home.

But all was not doom and gloom. The far-right Christian told listeners of the program about the silver lining of the flood, calling it an opportunity for Christians to celebrate the fact God considers them “worthy of suffering for His sake.” Louisiana should, in his words, “use this as an incredible, encouraging spiritual exercise to take you to the next level in your walk with an almighty and gracious God who does all things well.”

He also asked for prayers from listeners that he will be able to soon return to the airwaves. Listen to Perkins on the FRC podcast, below.