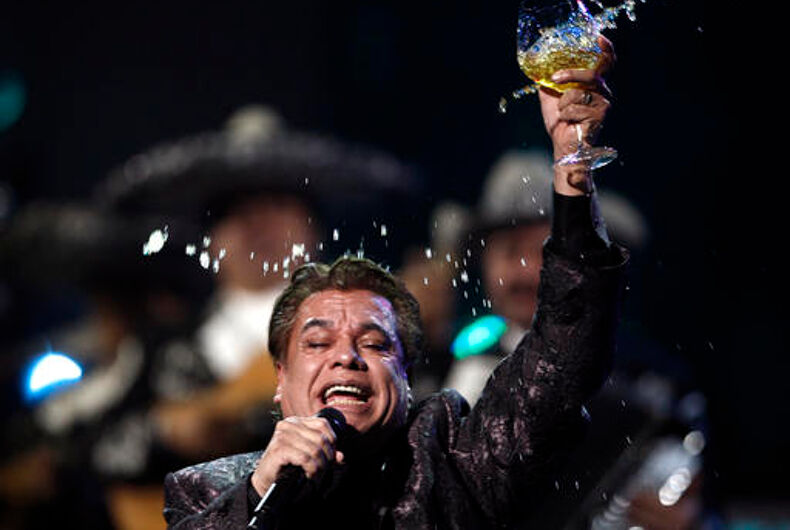 MEXICO CITY (AP) — Juan Gabriel, a superstar Mexican songwriter and singer who was an icon in the Latin music world, died Sunday at his home in California at age 66, his publicist said.

Juan Gabriel was Mexico’s leading singer-songwriter and top-selling artist. His ballads about love and heartbreak and bouncy mariachi tunes became hymns throughout Latin America and Spain and with Spanish speakers in the United States.

He brought many adoring fans to tears as they sang along when he crooned his songs about love and heartbreak, including his top hits, “Hasta Que Te Conoci” (“Until I Met You”) and “Amor Eterno” (“Eternal Love”). His hit “Querida” (“Dear”) topped Mexico’s charts for a whole year.

A performer, Juan Gabriel, whose real name was Alberto Aguilera Valadez, liked to wear jackets covered in sequins or dress in shiny silk outfits in hot pink, turquoise blue or canary yellow, and he was known for tossing his head before dancing or jumping around the stage.

“He has passed on to become part of eternity and has left us his legacy through Juan Gabriel, the character created by him for all the music that has been sung and performed all around the world,” his press office said in a statement.

It gave no details on his death. Publicist Arturo de la Mora told The Associated Press that he died at 11:30 a.m. in his home. He said the family would provide a statement later.

Juan Gabriel performed to packed auditoriums, including New York’s Madison Square Garden and the Kodak Theater in Los Angeles. His last concert was Friday night at the Forum in Inglewood, California. He was scheduled to perform Sunday in El Paso, Texas.

Mexican President Enrique Pena Nieto said through his official Twitter account: “I regret the death of Juan Gabriel, one of the great musical icons of our country. My condolences to his relatives and friends.”

Juan Gabriel broke ground in Mexico in 1990 by becoming the first commercial singer to present a show at Mexico City’s majestic Palace of Fine Arts, until then a forum reserved for classical musicians. The proceeds from the three sold- out concerts went to support the National Symphony Orchestra and became his most celebrated performances. His album “Juan Gabriel live from the Palace of Fine Arts” set record sales.

A six-time Grammy nominee, Juan Gabriel was inducted into the Billboard Latin Music Hall of Fame in 1996 and received countless industry awards, including ASCAP Songwriter of the Year in 1995, Latin Recording Academy’s Person of the Year 2009, and a star on the Hollywood Walk of Fame that same year.

Channel your inner Ellen DeGeneres with her new emoji collection