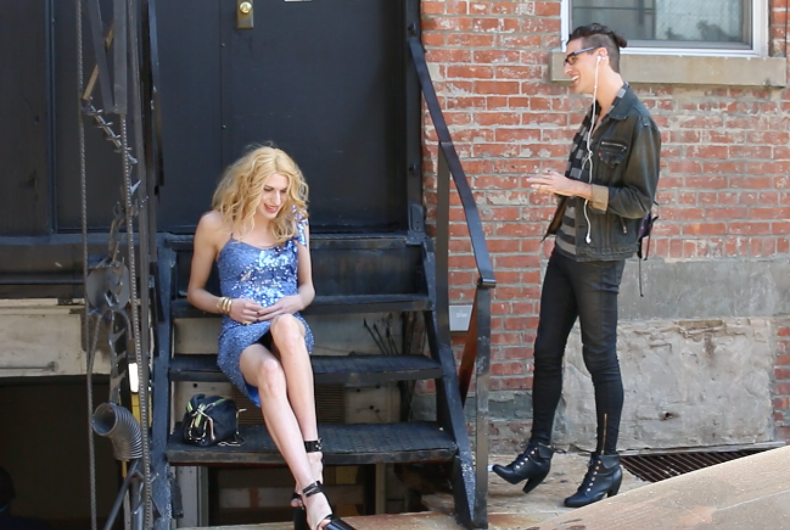 Trans people have exposed the truth regarding this fabrication we call “gender roles” as a social construction, one which our society ascribes to each of us as it assigns us a sex at birth. With the label “female” assigned at birth, society forces us to follow its “feminine script,” and with “male” assigned at birth, we are handed our “masculine” script to perform.

As scripts are given to actors in a play, these binary gender scripts also were written long before any of us entered the stage of life. In fact, the roles we were cast in have, very often, little connection to our natures, beliefs, interests, and values.

According to social theorist Judith Butler, “The act that one does, the act that one performs, is, in a sense, an act that has been going on before one arrived on the scene. Hence, gender is an act, which has been rehearsed, much as a script survives the particular actors who make use of it, but which requires individual actors in order to be actualized and reproduced as reality once again.”

If we challenge the director by refusing to follow our lines, and when we tell the truth about this human lie about gender, the director (society) doles out harsh, often fatal punishments. Most of us function, however, as conscious or unconscious co-directors in this drama each time we enforce gender conformity in others, and each time we relinquish our critical consciousness by failing to rewrite or destroy these scripts in ways that operate integrally and authentically for us as individuals.

The new web series “Façades” literally rewrites these historical gender scripts handed to each of us at birth. The show’s actors, in memorizing their lines, simultaneously challenge and rewrite societal gender scripts, and by so doing, expose the façades we have been taught and mandated to perform.

“Façades” focuses on the emerging boy-meets-they love story between Phinn (talented drag performer, “Fantasia Fabulous,” played by Russell Peck) and Rhys (male-assigned-at-birth non binary trans person played by Maybe Burke). Rhys, like so many others now, employ “they” as a gender-inclusive and non-binary personal pronoun.

Seen toward the beginning of their journey in the process of embracing and expressing gender authentically, Rhys gives voice and visibility to those of us who seem as strangers in the strange land of predetermined and tyrannically-enforced binary gender regimes.

Throughout the episodes, in their body language and clear direct statements, we, the viewer, experience Rhys’ discomforting surprise, shock, and bewilderment in inhabiting a world with a tightly-regulated binary gender system, a world that emotionally assaults Rhys at every turn. Rhys literally personifies the “Gender Outlaw” in the title of the book they read in one episode by pioneering trans activist and author, Kate Bornstein.

Rhys highlights the contrasting worldviews on historically gendered constructions by telling Phinn: “You run with it. I run from it.”

Throughout the series, the viewer peeps through the keyhole to see the on-camera as well as the backstories of the anxiety-ridden and expectant cis women contestants at Continental’s Newest High Fashion Model, an over-the-top campy parody of popular TV fashion runway shows.

Hosted by the always-elegant and seemingly unattainable Tiara Anderson-Anderson (played by Raquel Nicole Jeté), this lampoon punctures society’s balloon of compulsory expectations on the meanings of femaleness and womanness.

Tiara informs all potential candidates that for them to be considered for the show, they must be at least 5 feet 10 inches tall, no more than 110 lbs., between the ages of 18 and 26, with medium length hair, and, most certainly, “female” (assigned at birth). All others need not apply (read as all others she perceives to have failed in their quest for femininity).

One contestant, out and proud lesbian Alli Sabatini (played by Korinne Winter) attempts to navigate the line between making a statement in contesting (as a contestant) the societally-rigid standards of femininity while also placing herself in contention to win the competition.

While a very low budget production, “Façades” succeeds with high quality writing and directing of series creator, Ariel Mahler, and the acting of its talented cast.

In the service of full disclosure, Ariel Mahler, my creative and brilliant twenty-something cousin, has taught me, this almost seventy-something pre-Stonewall sissy-to-homosexual-to-gay-to-queer traveler, how to transform a relatively long life’s path into a runway to transcend and soar into the heights of authenticity.

The series emphasizes that each time we rewrite the scripts so as to give an honest and true performance of life, each time we work toward lifting the ban against our transcending and obliterating the gender status quo by continually questioning and challenging standard conceptualization of gender, only then will we begin as individuals and as a society to experience true authenticity touched by the warmth and brightness of a true sun, and the coolness and wetness of natural rain.

To watch “Façades”: The Web Series, click here, and watch a Q&A with the cast and crew below.