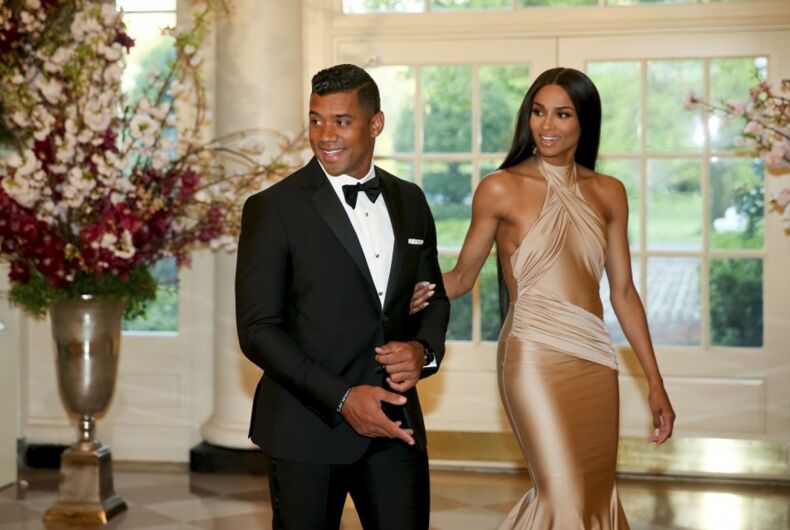 Russell Wilson and Ciara tied the knot on Wednesday. The couple is shown here at a Japanese State Dinner in 2015. Photo: (AP Photo/Andrew Harnik)

According to the power couple’s wedding planner, North Carolina was the first of three locales they considered.

“I did the whole thing — three times,” wedding planner Mindy Weiss told The Knot. “They were first getting married in North Carolina, but they called it off due to the transgender bathroom laws.”

Ultimately, after considering Paris, Wilson and Ciara married in an English castle, where Ciara wore a 13-foot wedding dress.

I wanted to wear a #Veil like my Mom… @peter_dundas surprised me with R.C.W Initials in the back at our second fitting. I was blown away by the detail, and thought! #StillDreaming… ❤️ #weddingdress

The decision to change venues should come as little surprise given Wilson’s recent comments about social responsibility.

Ciara has long been an advocate for the LGBTQ community. The “Like a Boy” singer recorded an “It Gets Better” video in 2013 and told The Advocate she supported NBA player Jason Collins when he came out.

“I think it’s cool, because you have to embrace who you are. If you don’t embrace who you are and accept who you are, you won’t be able to live a happy life. At the end of the day, we have to live our lives for ourselves,” she said. “I’m sure he had the biggest sense of freedom when he came out. I’m always happy for a person that can be confident, embrace who they are, and live life how they want to live.”