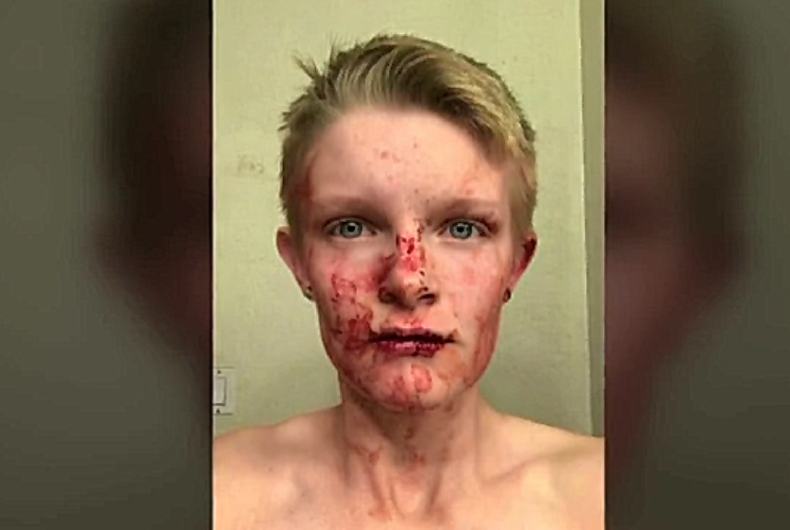 A lesbian couple was attacked by a straight couple outside a sushi restaurant in Santa Fe.

Amelia Allen and Haley Pryor say that they were waiting for the bill after eating at Kai Sushi when a straight couple entered with their two kids and gave dirty looks. In an attempt to get the straight people to stop staring, Allen waved and said, “I see you staring. Please stop staring at us.”

The straight man raised his middle finger to her. Pryor responded, “What was that for? What did we do to deserve that? What is your problem with us?” and the straight man said that he did nothing.

As the couple left, they talked about possibly talking with the manager but ultimately decided to drive home as the straight couple was also getting in their truck to leave. They drove in the same direction and at a stop sign the straight couple got out and went to the women’s truck.

In a Facebook post, Pryor described the incident. She says that she and her girlfriend got out of the truck and an argument started. The straight woman stood close to Allen and said, “You don’t know who you’re messing with. My husband leaves for Afghanistan tomorrow.” Pryor crossed to the other side of the truck to stick up for her girlfriend when the straight woman punched Pryor in the face, knocking her to the ground.

In the ensuing fight, Allen got a tire iron from the truck to attempt to make the straight people leave. Pryor was pushed up against the truck by the man who punched her through her jacket. The straight woman bit Allen, and they believe that the straight man was bleeding from being hit with the tire iron before the altercation was over. Pryor had been knocked unconscious.

The couple didn’t use anti-gay epithets, but Pryor suspects the attack was motivated by homophobia. “They definitely were aiming a lot of the anger at me because of how I look, I’m certain,” Pryor told KRQE News 13.

On Facebook, Pryor posted images of their injuries as well as video of the blood on their truck.

The post attracted many comments from conservatives claiming that the incident is “fake news” and accusing Pryor and Allen of self-injury.

Kai Sushi does not have surveillance cameras outdoors, but the restaurant is sharing their indoor surveillance video with police to attempt to identify the assailants. The straight couple paid in cash, so there’s no credit card information that can be used to find them.

Pryor described the couple as white in their forties, adding that the man was “extremely muscular.”

Santa Fe Police are investigating this crime as an aggravated battery.

“Never have I been afraid to show my affection, but now I hesitate to grab my girlfriend’s hand,” Pryor told KOB4.

Will America’s most homophobic judge be returned to the bench?