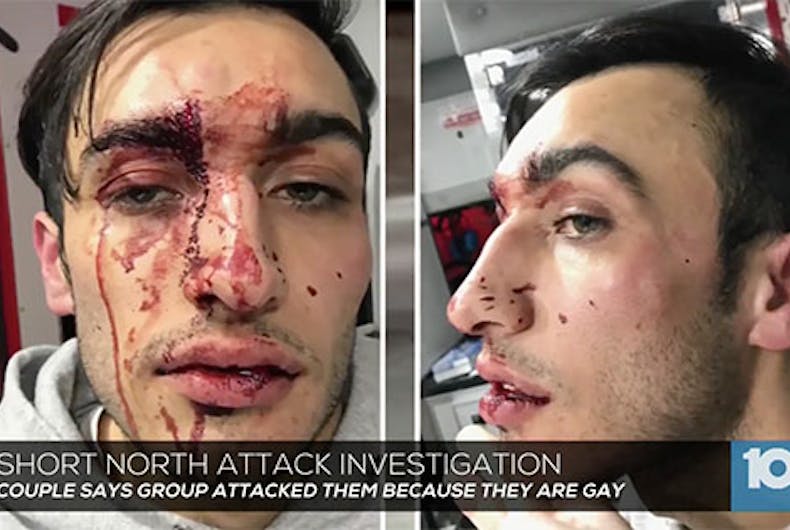 Police in two cities are investigating two unprovoked attacks on gay men that occurred early Saturday, but so far neither assault is being treated as a hate crime.

A couple in Columbus, Ohio said they were jumped by several men in two cars, and in Nashville, Tennessee, 24-year-old Francisco Montes said he was attacked from behind, after leaving a club in the early morning hours.

Montes is married, but was walking alone, when he heard shouting, and homophobic slurs.

“I didn’t even know where they were coming from until they shouted, ‘Faggot!’ behind me,” he told The Tennessean.

Montes told the paper that he turned around, and saw was a fist coming at him. “They just attacked me.” He fell to the ground and blacked out after being pummeled.

When he came to, he was at Vanderbilt Medical Center where a friend had rushed him, and in pain. Montes’s injuries required multiple stitches on top of his head; he said he also suffered a scratched cornea, a skull fracture, scrapes on his arms and knees and bruised ribs.

“I still had my wallet so it’s not like they were trying to rob me,” Montes said. His roommate later helped him locate his smashed iPhone.

Metro Police spokesperson Kristin Mumford told the paper police are investigating the incident as an assault, and she said if they arrest his attackers and conclude that it was a hate crime, then those charges will be added at that time.

Prosecutors will determine the filing of hate crime charges in the Columbus attack, according to WBNS-TV. Like the Nashville incident, it began with shouts of antigay slurs, and occurred around the same time early Saturday.

California transplants Bryson Beier and Mantej Sandhu were walking home via an alley just after 2 a.m. They moved to Columbus just a week and a half ago and say they chose their neighborhood specifically because they felt it would be welcoming.  That feeling has evaporated.

Sandhu said it started when they heard four or five men, who were walking to a car, yell slurs at them.

“They just started saying like ‘faggot’ to us and stuff like that, and we were like what? And just kept walking. And they were like, ‘God hates fags,” said Sandhu. “Then all of the sudden a bottle gets thrown at us. And they were saying, ‘You’re going to hell,’ and all that stuff. We at that point stopped, turned around, we took a photo of the license plate.”

That’s when Sandhu said a second car of four or five men pulled up, and they came under attack from as many as ten men.

“They were like, ‘You trying to mess with my boy?’ And then all of the sudden they start, they punch me in the face, throw me on the ground. and next to me he was going through the same thing with the other five black guys,” said Sandhu. “Each took a turn- punch, kick. Punch, kick. They were like, ‘Yeah, yeah.’ Punch, kick. ‘You like that?'”

“I thought I was going to die. I thought for sure this was the end,” said Beier.

“I don’t know if it was like my own personal self-protection or what, but my vision went black and my brain just kind of shut down and I almost stopped feeling for a minute,” said Beier.

Watch the report below from WBNS-TV about the attack on Beier and Sandhu.