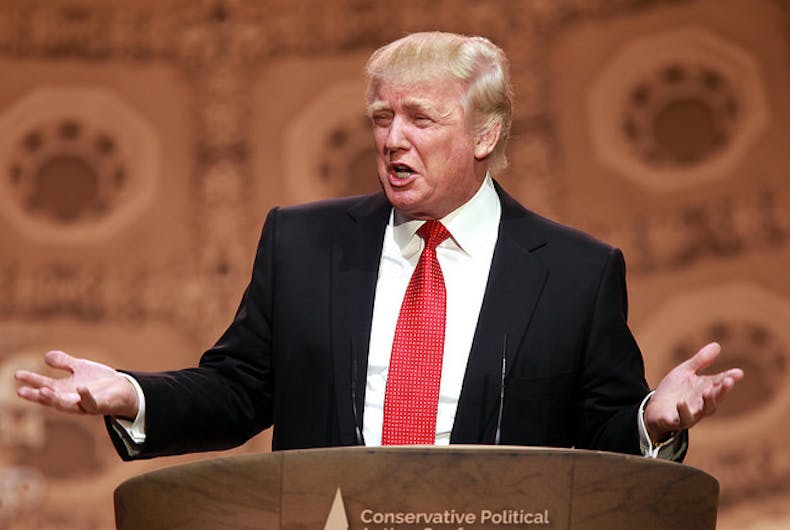 Throughout his campaign to the present day, Donald Trump has energized his base of supporters by consistently blaming and attacking the media generally, as well as specific outlets.

“[Journalists are] among the most dishonest human beings on earth,” said in his remarks at CIA headquarters. He continually calls them “liars” whenever they write stories unflattering to him and his administration.

The FAKE NEWS media (failing @nytimes, @NBCNews, @ABC, @CBS, @CNN) is not my enemy, it is the enemy of the American People!

Trump continues to describe The New York Times as “failing” even though subscriptions for this newspaper of note rose by 2.5 million just since the November 2016 election.

Donald Trump apparently does not understand how his bombastic style of presentation affects his relationships with the media and with his constituents, but he accuses the press of creating a confrontational climate.

Trump admitted that he actually likes and has been positively energized by his feud with the media.

“I will be honest. I sort of enjoy this back and forth, and I have all my life,” he continued, “but I have never seen more dishonest people than frankly the political media.”

Prior to and throughout his presidential run and into his administration, he has waged a frontal assault on the very democratic systems on which our country was founded. He called into question the legitimacy of Barack Obama’s presidency, the “fairness” of the “rigged” electoral system, the freedom of the press, the reliability of the intelligence community, the intelligence of the electorate, and the independence of the judiciary.

Steven Miller, Trump’s senior White House policy advisor, accused judges of inappropriately interfering in the President’s executive orders, and asserted that Trump’s national security decisions “will not be questioned” by the courts.

At press conferences, Trump tells reporters to “sit down” when they ask questions he doesn’t like, and he speaks of a “running war” with the media. He has even accused “freedom of the press” of causing terrorist bombings in the United States.

“The media should be embarrassed and humiliated and keep its mouth shut and just listen for a while,” Bannon said. “The media here is the opposition party. They don’t understand this country. They still do not understand why Donald Trump is the president of the United States.”

In this contentious atmosphere in which Trump continually lambasts and attempts to delegitimize the media, just before the election in October 2016, a video went viral showing two Trump supporters shouting “Lügenpresse” (German for “lying press”).

The German author Reinhold Anton coined the term in 1914 primarily in a foreign context to refer to “enemy propaganda.” The Nazis later popularized Lügenpresse to silence opposition to the regime.

In this regard, Adolph Hitler said:

“The great masses of the people will more easily fall victims to a big lie than to a small one.” And, “The victor will never be asked if he told the truth.”

Trump (encapsulated in his alt-right, alt-facts, alt-universe), like other authoritarians, uses “Machiavellian” tactics in his single-minded, cunning, plotting, and unscrupulous – sometimes vicious — actions in advancing his career, enacting his policies, and enhancing his power. To Trump, the ends certainly justify the means no matter who gets hurt.

Throughout his business career and into his presidency, even as he vilifies the courts, Trump uses law suits as a means of intimidation to get his way and to vanquish his opposition. He continually threatens to employ libel laws to sue the “crooked and lying” media. We will most likely see more of these threats emerging from Trump’s Ministry of Propaganda (a.k.a. “White House Office of Communications”).

While the wealthier major media outlets have the privilege and ability to stand up to Trump’s coercion, some of the smaller organizations who run on very tight budgets and depend on volunteer labor have no such privileges. For many of these smaller outlets, even the threat of a harassing lawsuit has resulted in self-censoring.

Though before the election they may have included some articles dealing with political analysis among their otherwise primary specialized focus, in my discussions with some leaders of these outlets, they told me under the guarantee of anonymity that they can no longer “risk” publishing articles that in any way criticize Trump or his administration.

While the United States Constitution created three independent governmental branches — executive, legislative, and judicial — and the First Amendment, supplemented and expanded by legislative actions and judicial decisions, granted “freedom of the press,” our “Fourth Estate” stands (or falls) more vulnerable and susceptible than the other three. Our very democracy, nonetheless, depends on a free and independent press. Without it, authoritarianism wins and democracy fails.

Unfortunately, Trump sees his “running war” with the media as a veritable “Game of Thrones” in which “to the victor goes the spoils.”

As Trump said in an Esquire interview back in 1991: “You know, it really doesn’t matter what the media write as long as you’ve got a young, and beautiful, piece of ass.”