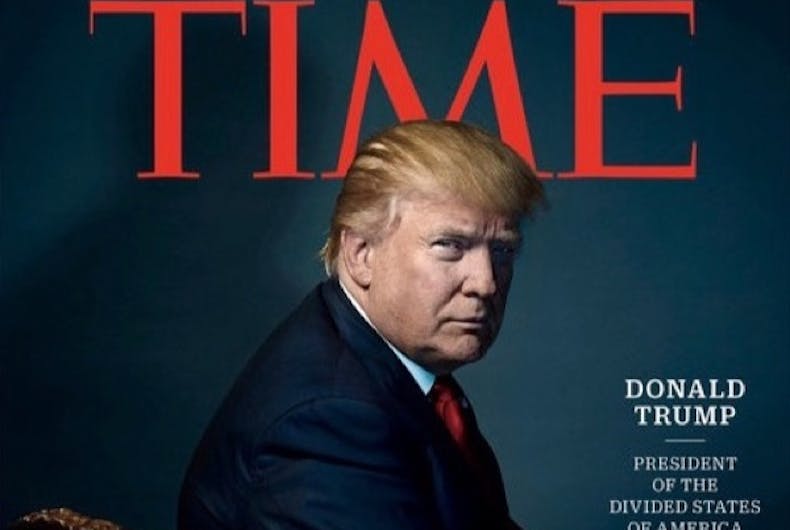 This was kind of a no-brainer. Time Magazine has named Donald Trump its “Person of the Year,” dubbing him the “President of the Divided States of America.”

From the magazine’s profile piece:

It’s hard to measure the scale of his disruption. This real estate baron and casino owner turned reality-TV star and provocateur—never a day spent in public office, never a debt owed to any interest besides his own—now surveys the smoking ruin of a vast political edifice that once housed parties, pundits, donors, pollsters, all those who did not see him coming or take him seriously. Out of this reckoning, Trump is poised to preside, for better or worse…

It turned out to be a failing strategy when Hillary Clinton, who loves policy solutions and believes in them, tried to make this race a character test, a referendum on Trump. But it was certainly understandable. He presented so many challenges, so many choices about what America values. Her popular-vote victory, while legally irrelevant, affirmed the prospect of a female Commander in Chief. In fact, she crushed Trump among voters who cared most about experience and judgment and temperament, qualities that have typically mattered when choosing the leader of the free world. Even at his moment of victory, 6 in 10 voters had an unfavorable view of Trump and didn’t think he was qualified to be President.

But by almost 2 to 1, voters cared most about who could deliver change, and in that category he beat her by 69 points. This is his next test. The year 2016 was the year of his rise; 2017 will be the year of his rule, and like all newly elected leaders, he has a chance to fulfill promises and defy expectations.