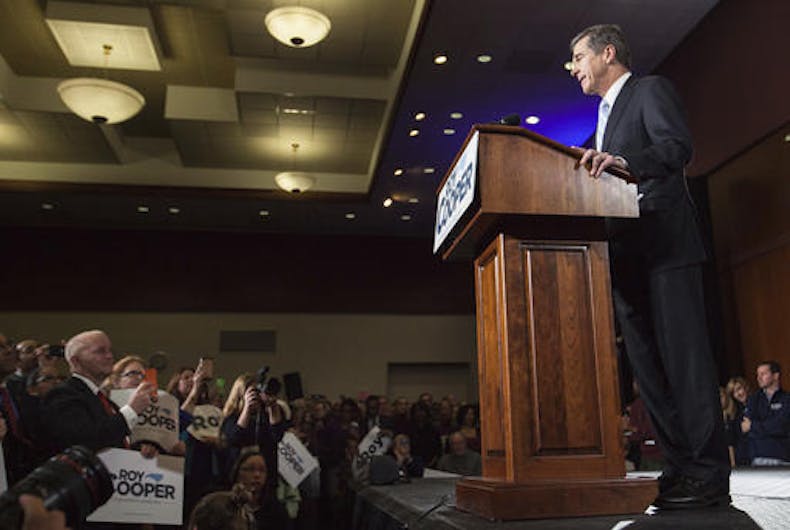 Roy Cooper told The Associated Press in an interview – two days after Republican Gov. Pat McCrory conceded – that he wants to assemble issue-specific bipartisan coalitions on such matters as education, renewable energy, criminal justice reform and ending House Bill 2. That law known as H.B. 2, signed by McCrory, also directs transgender people to use restrooms in schools and government buildings corresponding to the sex on their birth certificate.

Republicans still will command veto-proof majorities in the House and Senate in 2017, so Cooper will be hard-pressed to block Republican legislation. Just a few GOP lawmakers now say they want the bill repealed, but Cooper believes more would be willing as the fallout of a national outcry continues to impact the state.

Opposition from major business CEOs, entertainers and sports organizations has dealt a blow to North Carolina’s business-friendly image, leading companies to pull back on expanding in the state.

Citing the law, the NBA moved its All-Star game and the NCAA and Atlantic Coast Conference sent championship events out of North Carolina.

“I believe that most or all of the legislators understand the severe economic impact of House Bill 2 that it’s having on us and that something needs to be done,” Cooper said in the phone interview.

Noting an argument raised by some, the U.S. Justice Department and others contend the threat of sexual predators posing as transgender persons to enter a bathroom is practically nonexistent.

Meanwhile, backers of the law say the economic impact has been negligible compared to the state’s entire economy, which is benefiting from the recovery.

The law was passed in response to a Charlotte City Council ordinance approved last February that expanded non-discrimination rules for LGBT people in the use of public accommodations. The ordinance would have allowed people to use restrooms aligned with their gender identity.

State Senate leader Phil Berger, House Speaker Tim Moore and McCrory floated possible deals earlier this year in which the legislature would agree to repeal much of House Bill 2 if Charlotte repealed its ordinance. Charlotte leaders rejected the deals and litigation continues challenging and defending the law.

Berger said Wednesday he didn’t know whether changes to the law now would be made.

“That is just going to be a very difficult thing to deal with. I think it is something that there needs to be conversations about,” Berger said in an interview. “As to how we deal with it, I don’t think anybody knows the answer to that.”

McCrory conceded nearly a month after election night totals had Cooper leading by some 5,000 votes from 4.7 million cast. That margin doubled as counties counted provisional ballots and a partial recount saw no tabulation mistakes. In a belated victory rally Tuesday night, Cooper reaffirmed his commitment to doing away with the law, which he hammered McCrory on repeatedly during their campaign.

“With this election, North Carolina is on its way to repairing its reputation,” Cooper said to cheers, with many supporters holding small flags with a symbol for gay rights. “Let’s finish the job and repeal House Bill 2.”

Leaders of the Human Rights Campaign and Equality North Carolina, who met with McCrory inside the old Capitol a week after he signed House Bill 2 to express their opposition, held a news conference Wednesday outside the same building to celebrate Cooper’s victory.

Their groups endorsed Cooper and targeted McCrory for defeat with a massive get-out-the-vote effort focused on the estimated 255,000 gays, lesbians and bisexual and transgender people in the state who are voters.

“It is crystal clear that the people of North Carolina want this legislation gone,” Equality NC executive director Chris Sgro said, and “I believe that leadership needs to work with Roy Cooper to let the full repeal come up for a vote as soon as possible.”

On other issues, GOP lawmakers would still have the power of legislation and appropriating funds. Cooper told the AP he would also promote his policy agenda through executive orders and department rule-making.