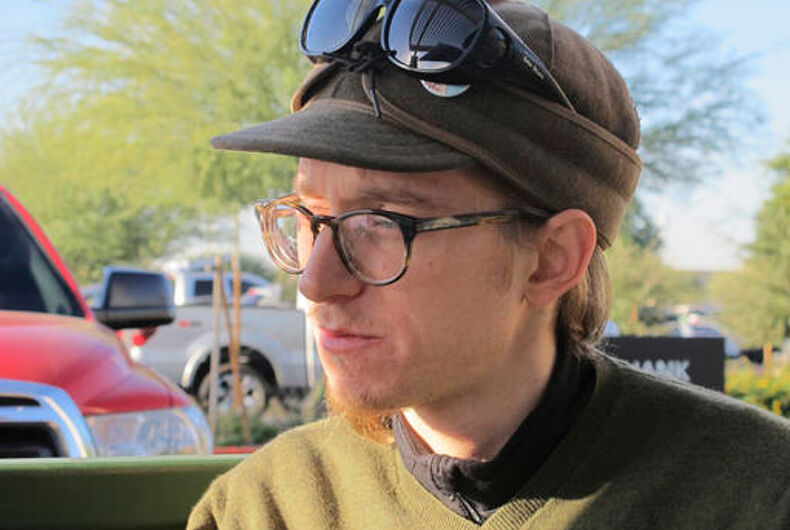 Christopher Farstad, a musician from Minneapolis, speaks with his father, James, at a coffee shop Friday, Dec. 9, 2016, in Gilbert, Ariz. Farstad was among a group of people attending a music event inside a warehouse in Oakland, Calif., on Friday night, Dec 2, 2016, when a fire tore through the building, killing dozens of people. He described the scene as a "hellish situation." Photo: AP Photo/Brian Skoloff

OAKLAND, Calif. (AP) — To set foot in the Ghost Ship on a party night was to pass through the industrial facade of an old warehouse and enter an exotic world glowing with rainbow lanterns, guarded by figures of Asian deities and pulsing with a welcoming vibe.

Performers who came to play the electronic dance party last weekend and those looking to be awed by the sounds and scene wanted to be among people who accepted them for who they were. Straight, gay, transgender, black, white or multiethnic, they wanted a place they could feel safe.

“This party was a cross-section of all those communities, far more than you find in a bar,” said Nihar Bhatt, a DJ and promoter who went there to see friends perform. “This is a true counter culture. It’s why we call it the underground.”

But comfort among kindred spirits masked dangers that now seem hard to have missed after a fire raced through the building and killed 36 people in the deadliest structure fire in the U.S. in 13 years. There were no fire alarms, no sprinklers and the two stairways from the second-floor party did not lead to the building’s only two exits.

For those who survived, it was largely a matter of luck that when the first cries of “fire” were heard, they were able to find their way through smoke and darkness or were near enough to a door or already outside.

“To think when I was squeezing out of that gate there were people suffocating inside is such a horrific thought,” said Alastair Boone, who had been socializing in a side yard and escaped to the street through a fence. “People were dying right in front of me and I didn’t know.”

The Ghost Ship was one of many converted warehouses in Oakland that serve as a work and living haven for a mix of musicians and artists — from jewelers to poets to tattoo artists and photographers. The communal living spaces have helped nurture a thriving underground art scene and provided space at a reasonable price in an area where astronomical rent hikes fueled by the tech boom have driven many people out.

Near the heart of the city’s industrial Fruitvale section, home to a large Latino population, the warehouse is a short walk from a Bay Area Rapid Transit station where the elevated train frequently whispers past. A retail corridor offers check cashing, quinceanera dresses and taquerias. One of the older establishments in the neighborhood is a large commercial fire extinguisher business a block away.

The warehouse was home to the Satya Yuga Collective founded by Derick Ion Almena, who billed it on Facebook as an “unprecedented fusion” of “bomb bunker helter skelter spelunker shelters and Indonesian straw huts rolling into valleys and down alleys.”

Almena and his partner, Micah Allison, leased the warehouse and rented out work and living space to artists and — as noted on Facebook — woodworkers, hot dog vendors, boutique designers and lingerie models. Almena also rented the space for occasional all-night parties. The couple and their three kids were not home the night of the fire.

The building owned by Chor N. Ng, however, was only permitted as a warehouse and the city had opened an investigation last month after neighbors complained about trash piling up and people living inside. An investigation into the fire could lead to criminal charges as serious as murder, prosecutors said.

The interior was constantly evolving as a revolving group rotated through and redesigned more than a dozen living spaces.

Upstairs, where Almena, Allison and his family lived, was a public area elaborately decorated in a Bohemian mélange of eastern religious artifacts, tapestries, old furniture and colorful prayer rugs. Organs, pianos and guitars were scattered throughout.

But hazards were many. It was a cluttered labyrinth and much of the construction was built with scrap wood. A mess of electrical cords snaked throughout the building to power everything from appliances to musical equipment to lights. A set of stairs was assembled with stacked up pallets and a ramp that had boards nailed to it as steps.

Bhatt, who had performed there in the past, was wary of all kinds of dangers. As a promoter, he wouldn’t put on a show there even though it offered a big dance floor and plenty of unique nooks to socialize in. He didn’t want that responsibility. But he would perform and attend events there.

“The reality is there are so few spaces like that” to stage an all-night party, Bhatt said. “We were willing to compromise and take the risk.”

The party on Friday was to feature several acts, including several friends of Bhatt, playing a variety of electronic dance music that ranged from DJs mixing sounds to musicians playing synthesizers and drum machines. Entry cost $10 before 11 p.m. and $15 after.

Christopher Farstad, a musician from Minneapolis visiting with a friend, arrived early and took pictures of the towering woodwork of planks nailed together and statues from Bali. It was a “unique and energetically vibrant place,” he said.

“Quite honestly, it was a beautiful place,” Farstad said. “The sad fact of the matter is that it was also very flammable.”

Boone, whose housemate was invited to the party by someone who lived there, arrived at 11. She was as interested in exploring the collective living environment and viewing the art as she was to hear music.

Boone was immediately impressed with a large wood-carved sculpture of a Buddhist deity when she first entered. She was stunned by the creativity of the place, which itself was a work of art, and grasped its appeal.

“It was just a space artists were gravitating toward,” she said. “I don’t think there were any limits to admission.”

It was a mix of magical and oddball. There were poems and stories on a wall, mannequin arms and legs dangling from above and it was bathed in soft, colorful lighting. The ground floor included living quarters hidden behind doors or curtains. Some people lived in campers.

Upstairs, DJ Johnny Igaz was playing an ambient, mellow set, Boone said. It wasn’t loud or crowded yet and people were speaking comfortably. A few bobbed their heads to the music. Alcohol wasn’t served, but some people were drinking beer they brought.

Boone and her friends had stepped outside into the cool night air in a fenced area next to the building. They planned to return inside, but the conversation with a drummer who lived there kept taking different turns and they were still outdoors about 20 minutes later when they heard someone yell “fire.”

Smoke was coming out the door and then an upper window by the time they got to the street.

Boone feared her cousin, also a housemate, was still inside. She phoned her and was relieved to learn she and some friends had gone to get beer and hadn’t returned yet.

Investigators haven’t identified the cause of the fire, but they said it started around 11:30 p.m. in the rear of the building. They ruled out a refrigerator as the cause, but were still looking at electrical systems as possible sources.

Residents on the first floor described waking up to the smell of smoke and barely having time to get dressed before being chased out by a wall of flame.

Some at the party upstairs, including a couple of high schools students who got separated from a friend when the lights went out, bypassed the rickety makeshift stairs and jumped from the loft in their haste to get out. Their friend never made it.

Farstad inhaled a lungful of smoke when he stepped from the bathroom, but he and a friend managed to find their way to safety through the dark.

He was surprised others hadn’t followed. He used the flashlight on his phone and tried to go back, but the light wasn’t bright enough and the smoke was overpowering. He had walked in on his feet, but came out on his hands and knees.

“It was like I was going into a hellish situation,” he said.

Others were breaking out windows hoping to pull out people trapped inside.

Farstad and others called for those lost inside: “Come this way! The exit’s over here!” they repeated, but only a few came out.

Bhatt had arrived before the fire broke out, but never entered because he was talking with friends out front. One of them, Joey Matlock, a DJ known as Joey Casio, had gone inside.

Bhatt stood there helplessly as the fire exploded. Several friends were still inside and flames were shooting out windows and the roof.

“When 20 minutes go by and you’re watching a fire rage, there was a part of me that hoped there was another place that people were exiting,” Bhatt said. “I didn’t want to say it out loud but this was pretty much over.”

People were weeping and embracing each other as firefighters tried to tame flames lighting up the sky. Some partygoers arrived late to discover the grim scene.

Bhatt busied himself contacting peers and learned other friends were inside. Sky Madden, a musician, called to ask if he had seen her brother, Griffin Madden, a DJ and promoter. Someone nearby burst into tears while listing friends who were at the show and Bhatt heard names of others that he hadn’t realized were there.

“I just couldn’t believe it,” he said.

He lost seven friends in all.

Farstad stood among the assembled crowd of shocked and grieving people for four hours, mesmerized by the glow of the fire and horrified.

Red Cross workers offered blankets to people standing in the cold and a chaplain handed out Oreos and small water bottles.

Anxious parents who had arrived hopeful of finding their children turned to despair when it became clear they wouldn’t be going home. Ambulances that had staged for casualties eventually rolled away. There were no more survivors.

Farstad was deeply sad and angry and felt what he called “cognitive whiplash.”

“To go from such a nurturing, creative and loving atmosphere to one of destruction so quickly — it snapped a piece of my mind,” he said.

Madonna gets emotional accepting Billboard Woman of the Year award