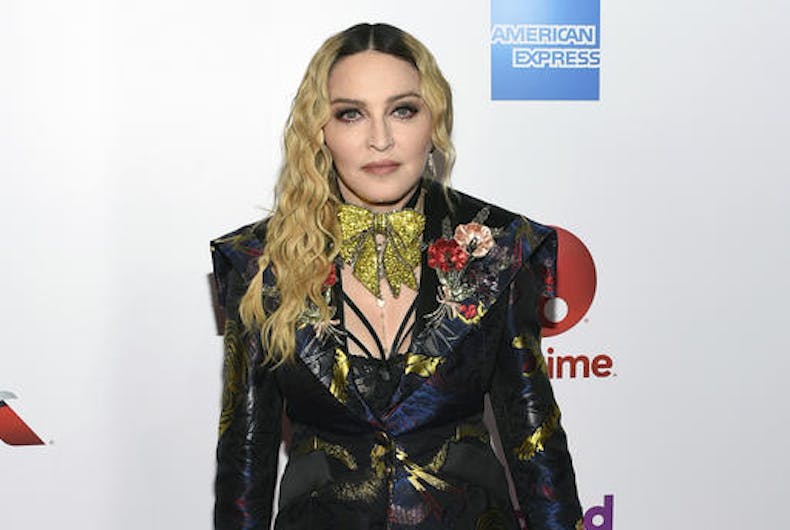 The Material Girl, named woman of the year Friday, was passionate as she spoke onstage in New York about being raped at knifepoint, battling critics, and being called words like “whore,” ”witch” and “Satan” throughout her career.

“I remember feeling paralyzed. It took me a while to pull myself together and get on with my creative life — to get on with my life. I took comfort in the poetry of Maya Angelou, and the writings of James Baldwin, and in the music of Nina Simone. I remember wishing that I had a female peer that I could look to for support,” 58-year-old Madonna said at Pier 36, where the audience included fellow honoree Shania Twain, Nick Jonas, Anderson Cooper and dozens of music industry executives.

“People say that I’m so controversial, but I think the most controversial thing I have ever done is to stick around,” Madonna said at another point. “Michael is gone. Tupac is gone. Prince is gone. Whitney is gone. Amy Winehouse is gone. David Bowie is gone. But I’m still standing,”

“For me as a gay teenager growing up, her music wasn’t just a soundtrack to my life, her music and her outspokenness, her willingness to stand up, her courage — it showed me as a teenager a way forward, a pathway,” he said.

The event also paid tribute to platinum-selling singer Kesha — who is currently in a legal battle with her former mentor and producer Dr. Luke — with its trailblazer award.

“It’s mind-blowing to be honored like this after the very public year I’ve had. I feel stuck, and I feel sad. And quite frankly today I feel bloated,” she said, as the crowd laughed. “I didn’t really feel like standing up and getting an award — I didn’t feel worthy of that. But I knew I had to drag myself out of my bed, put on my boots and walk up here (today) and say thank you to you guys.”

Then Kesha added in a serious tone: “Most importantly, do not let anyone else ever take your happiness. You are worth it, and thank you for reminding me that I’m worth it, too.”

Twain was given the icon award, while other honorees included country singer Maren Morris and pop singers Halsey, Alessia Cara and Meghan Trainor, who didn’t attend the event because she is on vocal rest. Fifth Harmony sang in honor of the “All About That Bass” performer.

“It’s an honor — that’s the only thing that comes to mind,” said Grammy-nominated R&B singer Andra Day, who earned the powerhouse award. “It’s humbling. It’s fulfilling. I’m experiencing so much gratitude at the same time because these women are part of the reason that I’m even able to be here.”

The annual Billboard luncheon also honored 100 female music executives, including iTunes and Apple Music’s head of global consumer marketing, Bozoma Saint John, who was ranked No.1. Before she spoke, she received warm words from Lady Gaga via video.

Watch the video of her speech below.

© 2016, Associated Press, All Rights Reserved.
This material may not be published, broadcast, rewritten, or redistributed.
Life
Billboard, Billboard Women in Music, Kesha, Madonna

Fire survivors: Ghost Ship was a rare space for artists on the margins