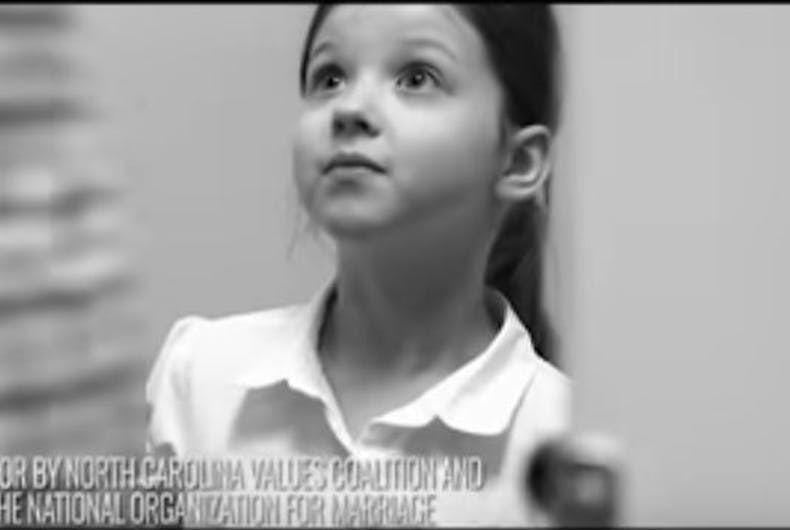 The National Organization for Marriage (NOM) and the NC Values Coalition is out with a new fear-mongering attack ad against Attorney General Roy Cooper over his opposition to the anti-LGBTQ law HB2, which requires transgender people to use the bathrooms matching the gender on their birth certificates in government owned buildings in North Carolina.

Cooper is locked in a tight gubernatorial race against Gov. Pat McCrory, who signed the bill into law. It has since cost the state millions of dollars and thousands of jobs. Most recently, 730 jobs were lost when a Washington-based real estate company decided to expand in Richmond, Va. instead of Charlotte in part due to HB2.

The ad, titled “Roy Cooper’s Bathroom Plan,” shows a man go into a women’s bathroom and enter a stall.

“Roy Cooper’s bathroom plan. What does it mean to you?” the voice over says. “Any man at anytime could enter a woman’s bathroom simply by claiming to be a woman that day.”

“No one is exempt,” it continues. “Even registered sex offenders could follow women or young girls into the bathroom or locker room and no one could stop them.”

A young girl is then shown entering the bathroom and going into a neighboring stall, which the man then also enters.

“Not long ago, North Carolina’s governor, Pat McCrory, signed an important common-sense law stopping men from gaining access to intimate facilities like restrooms and showers that are reserved for girls and women. We strongly applaud Governor McCrory’s leadership, but the left has gone crazy — targeting him for defeat with hateful, orchestrated attacks,” NOM said in an email, reports JoeMyGod.

“We’ve got to make sure that voters realize that Roy Cooper is siding with convicted sex offenders against the privacy and safety of girls and women in North Carolina. That’s why we’re pouring every available dollar into this advertising campaign,” they said, adding that they were “way short” of their goal.

They concluded by stressing the impact the race for North Carolina governor could have nationwide.

“The outcome of this race goes way beyond the borders of North Carolina. If Roy Cooper defeats Governor Pat McCrory, the media and LGBT extremists will spin it such that few other elected officials will want to take on the LGBT lobby and their allies in corporate America, Hollywood and big-time sports.

“However, if Gov. McCrory defeats Roy Cooper, it will send a message to officials all over the country that standing for the truth of marriage and gender are winning issues, ones they can be confident the people support. The stakes are extremely high.”