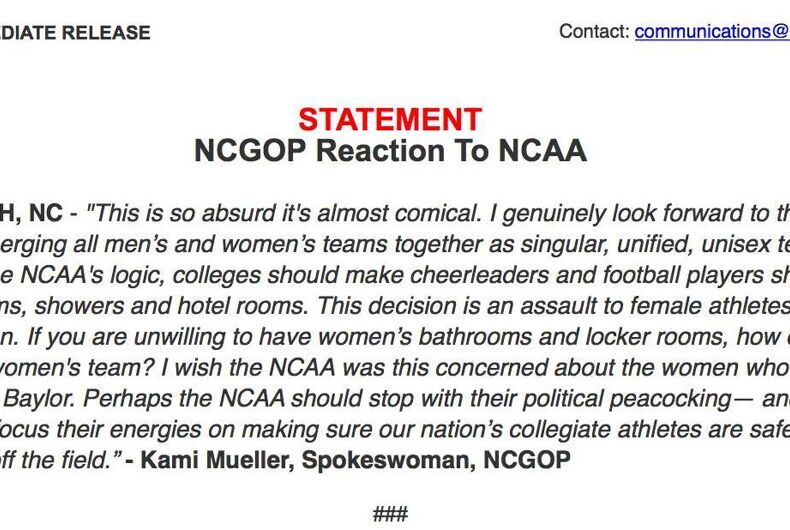 Official statement from the North Carolina GOP after the NCAA announced it would pull all championship games from the state over anti-LGBT laws.Photo: Facebook

The North Carolina GOP is frothing mad after the NCAA yanked their championship games from the state over HB2, the new law requiring transgender people to use the bathroom of the gender listed on their birth certificate. The law also nullified local ordinances that protect gays and lesbians from discrimination.

Kami Mueller, the spokesperson for NCGOP, issued the following statement last night after the decision was announced.

This is so absurd it’s almost comical. I genuinely look forward to the NCAA merging all men’s and women’s teams together as singular, unified, unisex teams. Under the NCAA’s logic, colleges should make cheerleaders and football players share bathrooms, showers, and hotel rooms. This decision is an assault to female athletes across the nation. If you are unwilling to have women’s bathrooms and locker rooms, how do you have a women’s team? I wish the NCAA were this concerned about the women who were raped at Baylor. Perhaps the NCAA should should stop with their political peacocking – and instead focus their energies on making sure our nation’s collegiate athletes are safe, both on and off the field.”

Obviously, the party is reaching for ways to push back against critics of the law, but surely they can do better than comparing cheerleaders and football players showering together to transgender women peeing in peace in the ladies room.

Oh, wait. There is no way to justify discrimination. That’s the problem.