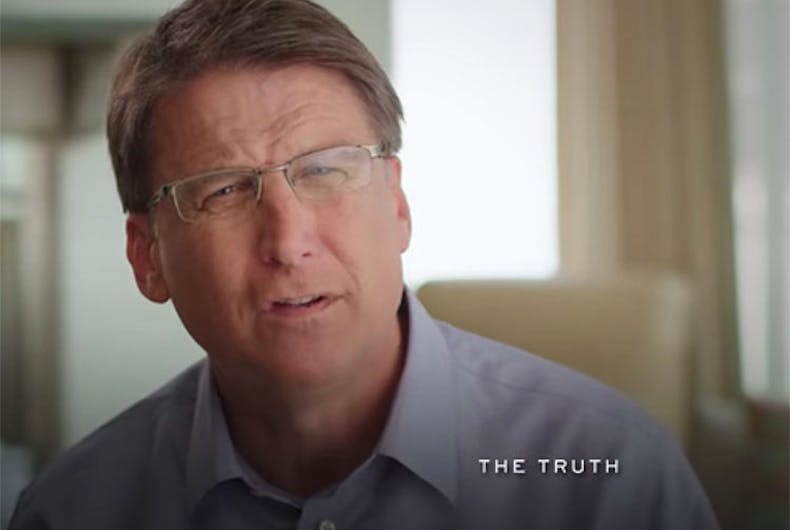 A new campaign commercial from Republican incumbent Gov. Pat McCrory of North Carolina targets transgender boys, furthers the egregious myth that trans women and girls are predators and shows he is still milking the issue that has come to define his one and only term in office.

The ad, which comes with a banner announcing “The Truth,” as McCrory speaks, is clearly aimed at supporters of House Bill 2, the hastily enacted legislation that restricts transgender individuals from using any public bathroom except those matching the gender on their birth certificate.

The “common sense” candidate, as he has positioned himself, appeals to those who consider transgender people dangerous and their use of gender-appropriate rest rooms a threat to privacy. He speaks only about “boys,” without uttering the word “transgender” or addressing the fact that his hateful law forces trans men to use ladies rooms.

“You know, when we were raising average teacher pay, creating new jobs and cutting taxes, other folks were actually pushing to make our schools allow boys to use the girl’s locker rooms and showers. Are we really talking about this?” McCrory says as he squints and shakes his head in a closeup. “Does the desire to be politically correct outweigh our children’s privacy and safety? Not on my watch. Our kids and teachers are my priority. This is North Carolina. Let’s do what’s right.”