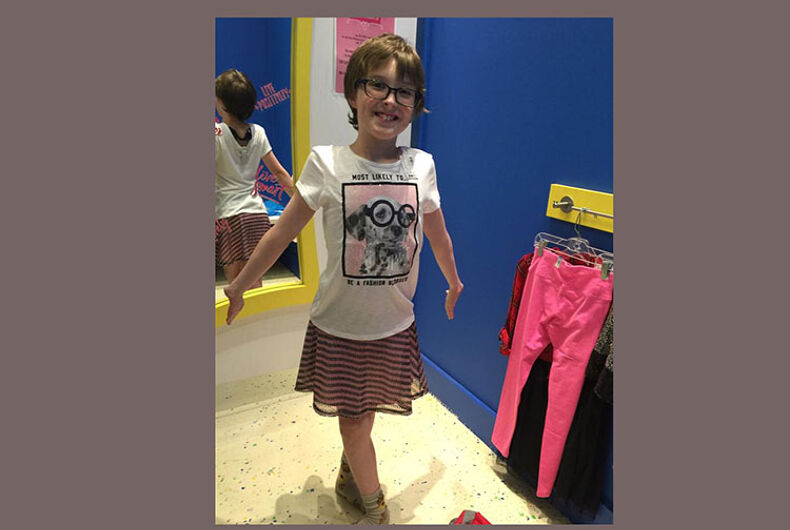 Martie Sirois of Raleigh, N.C. is the kind of mom every gender non-conforming child should have. Earlier this year she made plans to take her 10-year-old son shopping for “sparkly” clothes, and this week finally made his dreams come true.

Sirois wrote a letter to their local Justice store in appreciation and posted it along with photographs on Facebook.

She explained that her youngest would accompany his older sister years ago, and had expressed a desire to shop there since he was 4.

“My son would longingly look in the windows of Justice and say, ‘I wish I could shop there.’ But we never went in. There was just something off-putting about those words on your window, reading, ‘Just for girls,’ that kept us away time and time again. My son doesn’t identify as a girl, at least he hasn’t for as long as he has been able to communicate, although he has always acted like a stereotypical girl, played exclusively with stereotypical girls toys, and has almost exclusively female friends.”

Sirois wrote that in spite of that evidence, her son isn’t ready to be labeled “transgender,” and that his family has his back.

“My husband, myself, and my 2 older cisgender children are all on the same page, and we’re just looking for ways to support our gender creative, in transition, born-male child. He may one day be LGBTQ+. He may not. We’re open to whatever, as long as he’s happy, true to himself, and not hurting anyone.”

A plan to take him to Justice over Spring Break was derailed by the sudden and unexpected enactment of House Bill 2, which she described in detail to the store managers in her letter:

“Instead of going to Justice that day, I ended up glued to my laptop, trying to understand what to make of this new, horrific anti-trans, excruciatingly discriminatory law based on hyped up fears over a “potential” crime that has never actually happened. I wondered what this meant for my son’s future, especially if he ends up transitioning to female.”

When it came time for back to school, Sirois wrote that her 10-year-old “settled on ‘boys’ back to school clothes,” but with his own touches:  two pairs of “‘girls’ Twinkle Toe sneakers, along with a hot pink, peach, and purple backpack, and pink lunchbox shaped like a purse.”

Sirois belongs to a support group for parents of trans and other gender non-conforming children.When she mentioned her dashed hopes to take her son to Justice, the mother of a trans girl took up the challenge, visited the store and grilled the managers on what she might face, especially if a customer raised objections.