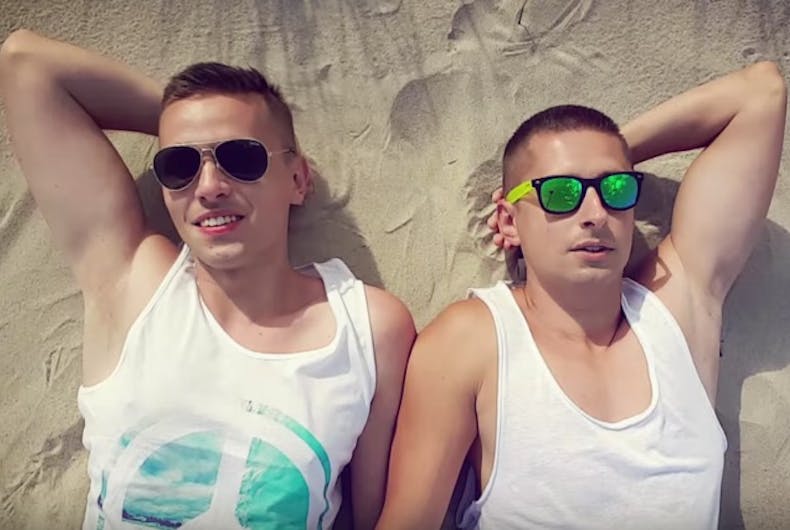 When Polish hotties Jakub Kwiecins and his boyfriend, David, started filming themselves goofing off to Roxette’s latest song “Some Other Summer,” they had no idea what it would turn into. Now after thousands of views, their homemade music video is getting attention from the band themselves – and fans are hoping it becomes the official video for the release.

Kwiecins told LGBTQNation in an exclusive interview that the two were vacationing at the Baltic Sea when inspiration struck. They were listening to the song and singing along when they came up with the idea to film themselves lipsynching to the number.

“The beach was empty so we took a camera and started recording,” he said. “After one shot, we did one more and more and then we decided that wherever we go we will record a few words. It took us 3 days to record everything. Most of the shots we did at Hel Peninsula, some of them were taken at sand dunes in Slowinski National Park and Vistula River.”

Still Poland isn’t known as an LGBT-friendly country. Were the two worried about any potential backlash to posting the video?

“We had doubts before we posted on YouTube,” Kwiecins said. “Polish society is very conservative and we were a bit afraid of [the] response, but we also wanted to show people that we – gay people – are absolutely normal and our love has no difference to their love.”

“So finally we uploaded the movie on YouTube and posted it for friends on our Facebook profiles. People seemed to like it but a few days later we noticed the video had been seen by thousands of people. We were surprised because we didn’t know the reason.”

It turns out that Roxette vocalist Per Gessle saw the video, liked it and shared it on the official Roxette Facebook page where it went nuts. Soon Roxette’s management emailed the two and sent them a Roxette book with Per Gessle’s signature.

“We never expected that our small video will go so high,” Kwiecins said. “Roxette is a music legend and it’s really thrilling knowing that Per Gessle watched our film and he liked it. Everything was a huge surprise for us but we take it easy. We love our life don’t want to change anything and this video is our first one and for sure – the last one. It’s just one shot only.”

If it is the last video they make, it’s the perfect way to end the summer with sunshine and smiles. If not, maybe we’ll see them some other summer.

Which American colleges have the most LGBTQ-friendly campuses?