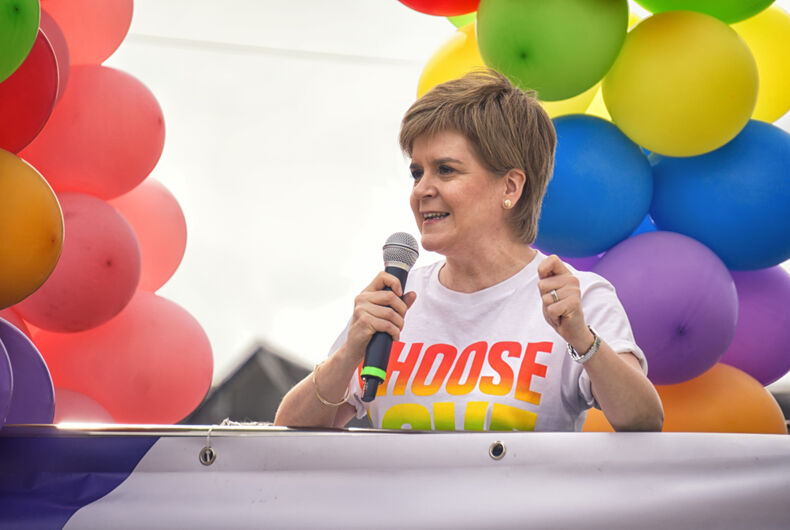 The U.K. government will block a Scottish bill designed to make it easier for transgender people to change their legally recognized gender.

In December, the Scottish Parliament voted to pass the Gender Recognition Bill, which will make it easier for trans people – including those as young as 16 – to change their gender legally. The bill, which passed in an 83 to 39 vote, is intended to speed up and streamline the process by which people obtain a gender recognition certificate in Scotland.

Currently, people across the U.K. must apply to a gender recognition panel and present a diagnosis of gender dysphoria in order to legally change their gender. As the BBC notes, the Scottish government has argued that the current process is invasive and causes distress to transgender people.

Under the new law, trans people would no longer be required to present a gender dysphoria diagnosis or other medical reports. It reduces the time an applicant must prove they have lived as their gender from two years to three months. The bill would also lower the minimum age at which people can apply from 18 to 16. Applicants under the age of 18 would need to have lived full-time as their gender for six months. Anyone who legally changes their gender would still need to swear an oath to live the rest of their lives as that gender, making it a criminal offense to break that oath.

Opponents of the Scottish bill have said it would impact women’s rights by making it easier for anyone to “self-identify” as a woman. They say it would also endanger women-only spaces and services like changing rooms, bathrooms, and refuges.

Harry Potter author J.K. Rowling has criticized Scottish First Minister Nicola Sturgeon for her support of the bill, posting a photo of herself wearing a T-shirt calling Sturgeon a “destroyer of women’s rights.”

“This is about an existing process by which people can legally change their gender and it’s about making that process less traumatic and inhumane for trans people – one of the most stigmatized minorities in our society,” Sturgeon said in response to Rowling’s post. “It doesn’t give trans people any more rights, nor does it take away from women any of the current existing rights under the Equality Act.”

Last month, an anti-trans protestor lifted her skirt and flashed the Scottish Parliament with a fake vagina as legislators voted to pass the bill.

The U.K. government’s Scottish secretary, Alister Jack, said in a letter to Sturgeon that the bill would have a “significant impact” on protections contained in U.K.-wide 2010 Equality Act. Jack will reportedly take steps Tuesday to block the bill.

The move represents the first time U.K. ministers have blocked a Scottish law.

“This is a full-frontal attack on our democratically elected Scottish parliament,” Sturgeon said in a tweet on Monday. She added that the Scottish government would defend the legislation.

This is a full-frontal attack on our democratically elected Scottish Parliament and it's ability to make it's own decisions on devolved matters. @scotgov will defend the legislation & stand up for Scotland’s Parliament. If this Westminster veto succeeds, it will be first of many https://t.co/3WXrjyivvC

The decision to block the Scottish bill represents not only an attack on transgender rights, but also a significant constitutional clash between the Scottish and U.K. governments.