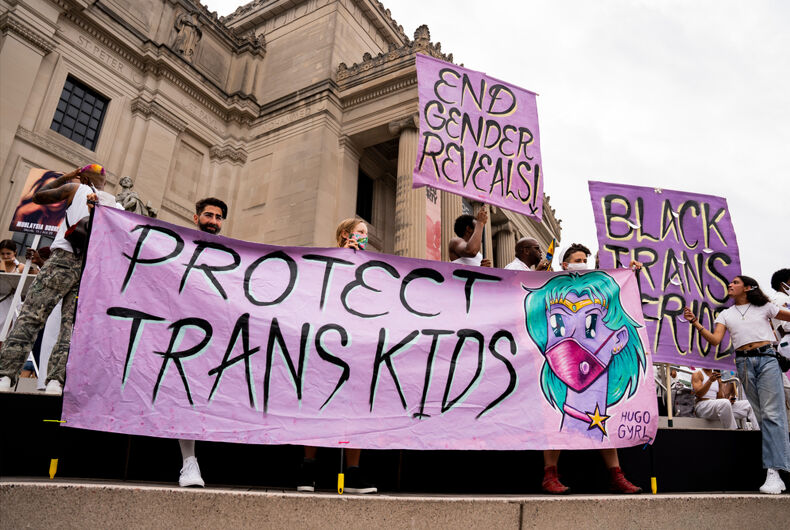 In a long Instagram post, Chase Strangio, the Deputy Director for Transgender Justice with the ACLU’s LGBT & HIV Project, criticized The New York Times’ latest coverage of transgender youth and pointed out the ways in which the paper’s most recent report fails.

On Sunday, the Times posted a story about the frustrations some parents reportedly feel when their children are allowed to socially transition at school without their knowledge. As the paper notes, reporter Katie J.M. Baker spoke with more than 50 people for the piece, including parents and their children, public school officials, medical professionals, and lawyers for both LGBTQ+ and conservative advocacy groups. The story centers on the tension between educators’ duty to create a safe environment for students where their identities are respected, and parents’ rights to know about and make decisions regarding their children’s medical and mental health.

“Two states are gearing up to ban trans health care this week, 150 anti-LGBTQ+ bills have been filed in January and this is what we get from the paper of record,” Strangio wrote in response to the story.

Strangio went on to list three key ways in which the Times’ latest report fails.

“First, it extensively shares the voices of parents who are skeptical of transness and who come from a place of disbelief rather than agency, autonomy and support for their children. Even the ‘supportive’ parent is angry about the school not disclosing information to her,” he wrote.

“There is no nuance to the ‘parental rights’ position. What about parents like me who WANT their kids to be able to safely explore their identity, sexuality and sex at school without having to worry that information will be disclosed to their parents. I hope and pray that my child finds safe spaces at school to ask questions that they might not feel comfortable coming to me with first.”

“Second, the only real provider they highlight is Erica Anderson who has clearly decided to center herself for attention and is part of the goal of saying ‘look these liberals even think this is too much.’ ‘This’ being giving kids the opportunity to explore who they are.”

As the Times notes, Anderson, a transgender clinical psychologist who has counseled hundreds of children about gender identity issues, filed an amicus brief in November in support of Maryland parents suing their school district for not telling them that their children were socially transitioning at school.

The Times story notes that the number of young people who identify as transgender has nearly doubled in recent years, according to a recent CDC survey. Critics have said that focusing on these stats reinforces a harmful right-wing narrative that mischaracterizes trans youth as participating in a viral trend rather than feeling comfortable and accepted enough to come out as their authentic selves.

It is no accident, that two anti-trans, "just asking questions" articles have been published at the start and end of Trans Visibility Week.

To be clear: There is peer reviewed scientific evidence that being trans is NOT a social contagion and fad.

“No one is being forced to be trans by peers at school or by YouTube,” Strangio wrote. “We, at all ages, find people who are like us, who can remind us that we aren’t alone in the world. Understanding yourself through the experience of others is not contagion, it is humanity.”

“There is an unrelenting and cruel pressure to be cis and straight. The world is so hostile to transness and yet somehow we are subjected to these debates over whether there are too many of us,” he continued. “Well, there will never be too many trans people. And each of us is a gift to our families, our communities and the world.”

Strangio and others have been critical of the Times’ reporting on trans issues since at least 2016, accusing the paper of false equivalency in its coverage of anti-trans “bathroom bills,” elevating anti-trans voices in its opinion pages, failing to assign trans reporters to cover trans issues, and perpetuating misinformation about gender-affirming healthcare for young people.

“The NYT’s horrible coverage of and fixation on trans people has been central to the progression of anti-trans bills and policies nationally. I have been trying to raise alarms about this for the past 6 years but the stakes could not be higher than they are now,” Strangio wrote in a tweet last July, following a New York Times Magazine story by cisgender journalist Emily Bazelon about the supposed increasing number of transgender youth seeking to medically transition. The piece was widely criticized for disproportionately quoting anti-trans organizations and for “concern trolling.”

The story was later referenced in an “expert report” filed by the state of Texas in support of its policy of investigating parents who help their transgender children seek gender-affirming care.

This is from an expert report filed by Texas in defense of its policy of directing the "child welfare" agency to investigate medical treatment for gender dysphoria as child abuse. It is hard to watch this all unfold with such devastating harms. pic.twitter.com/Jrqhubjzex

George Santos is a liar & grifter. He’s the perfect example of a modern gay Republican