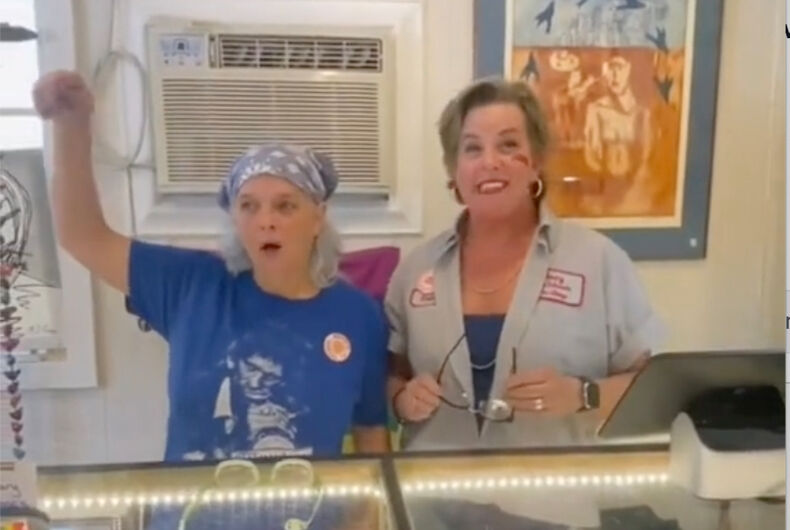 A lesbian couple has closed their shop in a small Florida town after allegedly enduring repeated harassment, including anti-LGBTQ+ comments from a town commissioner.

Joy Drawdy says that she and her wife were initially welcomed by the community when this past June in Micanopy, Florida, they opened Restless Mommas, which sold clothes and crafts made by LGBTQ+ artists and people of color. But Drawdy told University of Florida student paper The Independent Florida Alligator that they quickly became uneasy.

Soon after opening, they were informed by the shop’s landlord of a letter from the town commission demanding they remove a Pride flag displayed outside the building, calling it a violation of local zoning ordinances.

They later learned from friends and customers that Micanopy Commissioner Mike Roberts had allegedly made derogatory comments about their sexuality. As The Alligator reports, Roberts has a history of posting anti-LGBTQ+ sentiments on social media.

“I just feel sorry for those people. A eternity in Hell is their reward [sic]. God please have mercy on their souls,” Roberts posted on Facebook in 2012.

In 2013, he responded to an article about a father’s message of support to his gay son. “This all sounds good to read and get warm fuzzy feelings, but the fact of the matter is being Homosexual is a sin,” Roberts wrote. “Sin will take you to the pits of Hell. A loving father will tell his son the truth about his sin.”

“In such a small town, we couldn’t escape. We couldn’t do business,” Drawdy said of learning about Roberts’s comments from roughly 30 Micanopy residents. “It was all anybody was talking about.”

In the weeks that followed, Drawdy said that trucks would pull up in front of the shop, rev their engines, and then skid away. She also began noticing spiteful comments on Facebook.

Feeling threatened and fearing for her family’s safety, Drawdy and other business owners took up the issue with Town Administrator Sara Owen, who told them the issue would be addressed at the Town Commission meeting on January 10. But Drawdy said that Owen soon stopped returning her calls. Ahead of the Jan. 10 meeting, Drawdy’s neighbor was told that Roberts’s alleged comments would not be on the formal agenda, as town leaders did not consider it a town issue.

Ahead of the meeting, the Drawdys decided to close Restless Mamas and move their unsold inventory to another shop they own in Gainesville, Florida. The town commission’s refusal to address the issue, she said, “was our last breath.”

“To have two women invest in a business in this town — that helps us all — be discriminated against because they’re gay is not OK,” Micanopy resident Deborah Hart said during public comments.

Roberts claimed that his comments were misunderstood, saying he merely referred to the Drawdys as “the two lesbian women who bought a business downtown.” Owens claimed that the issue was left off the meeting’s agenda because Roberts was “acting in his personal capacity” when he made the alleged comments.

“You know the most discriminated person sitting in this room?” Roberts asked. “[They are] disliked by whites, Blacks, reds and yellows — [it’s] the fat people of this world.”

“I didn’t come in here and identify [him] as the fat commissioner,” Russell said following the meeting. “In my view, he doesn’t get it… If it’s not intentional, then he’s ignorant.”

What is demisexuality really?

GOP members of congress are badmouthing Rep. George Santos to the press