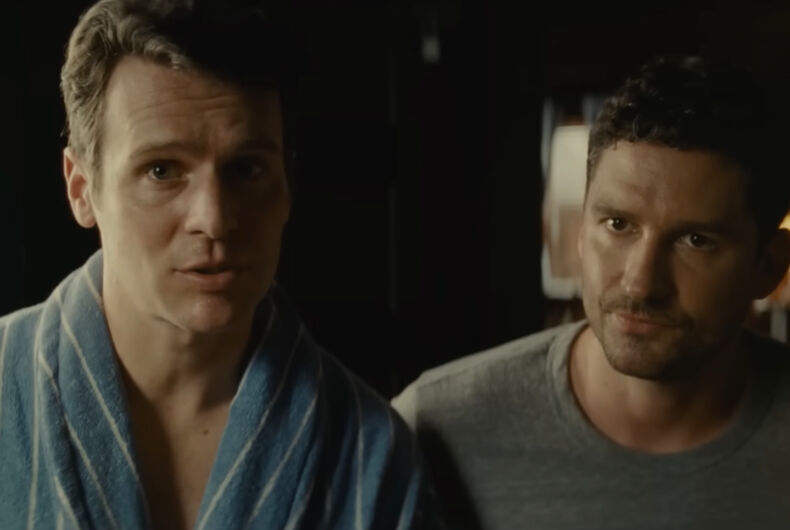 Jonathan Groff and Ben Aldridge in the trailer for Knock at the CabinPhoto: Screenshot

2022 may go down in history as the year of the big gay rom-com, but so far it remains hard to predict what kind of year 2023 will be for LGBTQ+ films. The History of Sound, a WWI romance starring Josh O’Connor and Paul Mescal, Dan Levy’s directorial debut Good Grief, and Bradley Cooper’s Leonard Bernstein biopic Maestro are all expected later this year, as is Sophia Coppola’s Fairyland, which will premiere later this month at the Sundance Film Festival.

Of course, none of those highly anticipated films has an official release date yet. Instead, the year in queer film is kicking off with something… a little unexpected: an apocalyptic horror-thriller from twist master M. Night Shyamalan. Here’s everything we know so far about Knock at the Cabin.

Here’s the official description of the film’s plot, per Universal Pictures: “While vacationing at a remote cabin, a young girl and her parents are taken hostage by four armed strangers who demand that the family make an unthinkable choice to avert the apocalypse. With limited access to the outside world, the family must decide what they believe before all is lost.”

The “unthinkable choice” here involves the captive family deciding which member will be sacrificed to prevent global destruction.

What’s queer about that:

As you probably gathered from the trailer above, the parents in question are a gay couple, played by out actors Jonathan Groff (Mindhunter, Looking) and Ben Aldridge (Spoiler Alert). Kudos to Shyamalan and co. for hiring actual gay performers in gay roles! And it should be interesting to see how the characters’ identities play into the film’s themes and thrills—like, for instance, the perversity of a gay couple being forced to sacrifice their family for the greater good of a world that remains essentially homophobic!

Who else is in the film:

It’s based on an acclaimed novel

Knock at the Cabin is based on horror author Paul G. Tremblay’s 2019 novel The Cabin at the End of the World. The book won Tremblay his second Bram Stoker Award the year it was published. No less a horror authority than Stephen King recommended the novel to his followers on Twitter, calling it “thought-provoking and terrifying.”

Paul Tremblay's new one, THE CABIN AT THE END OF THE WORLD, comes out in June. You should mark it on your calendar, it's that good. Thought-provoking and terrifying.

In his review for The Verge, Andrew Liptak wrote that “Tremblay has penned a story that’s not only a nightmare as it plays out on the page, but one that’s grimly reflective of the times that we live in.”

“There’s a very, very good chance you’ll never get it out of your head again,” NPR’s Jason Sheehan wrote of the novel.

Shyamalan adapted the film’s screenplay himself alongside Steve Desmond and Michael Sherman. Your mileage may vary whether that’s a pro or a con. Shyamalan’s work has been decidedly uneven since his 1999 breakout, The Sixth Sense, but he’s managed to make something of a comeback in recent years with films like The Visit (2015), Split (2016), and Old (2021).

What is the film’s rating:

For what it’s worth, Knock at the Cabin is only Shyamalan’s second film to receive an R rating. According to Collider, the film earned the R rating for “violence and language.”

When is it out:

Initially scheduled for a February 17 release, Knock at the Cabin has been bumped up a couple of weeks. It now hits theaters on February 3.

Life
gay thriller, Knock At The Cabin, M. Night Shyamalan, what we know

George Santos confessed to theft & forgery in Brazil. Now he denies that too