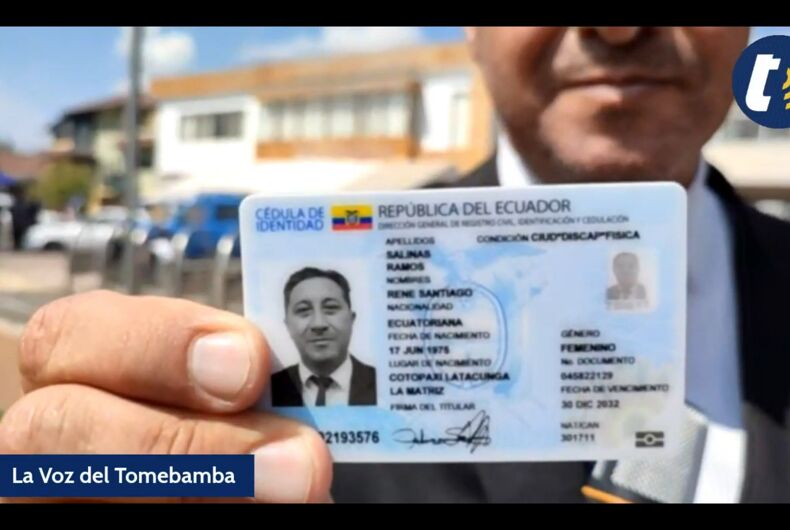 A father in Ecuador has legally changed his sex to female to gain custody of his children.

The cisgender man, René Salinas Ramos, said the change was exclusive to his fight for custody of his two daughters, whom he says are living in an abusive environment with their mother.

“I am very sure of my sexuality,” Salinas Ramos told La Voz del Tomebamba. “What I have sought is that I want to be a mother, so that I can also give the love and protection of a mother.”

The change was granted at the Civil Registry office in the city of Cuenca on December 30.

According to Salinas Ramos, the Ecuadoran legal system favors mothers over fathers regarding custody issues.

“Being a father in this country, Ecuador, is punished and I’m only seen as a provider,” he said. “The laws say that the one who has the right is the woman. As of this moment, I am female. Now I’m also a mom; that’s how I consider myself.”

The option to change the gender on Ecuadoran documents was adopted in 2015 but did not extend to internationally recognized identification like passports. Ecuadoran trans activist Diane Rodríguez, the country’s first trans Assembly person from 2018 to 2021, says Salinas Ramos’ actions threaten a bill to do just that, now up for a vote in Ecuador’s Assembly.

“This man’s private matter, to obtain custody of his daughters, isn’t the spirit of the law,” Rodríguez told VICE World News. “So, what is happening at this moment could cause a change of criteria of some assembly members for the change of sex in the identity card of trans people.”

“I understand that in his situation, in desperation, he chose to change the gender on the identity document,” said Rodríguez. But, she added, “it does not make sense that you have changed your gender in the identity document without being a trans person, only with the objective of taking advantage to obtain custody.”

In his comments to local media, Salinas Ramos said his decision “is not against a person, not to harm anyone, but rather to fight against this system that has stigmatized the fact of being born a man.”

Surprise! George Santos’s sister may have some shady dealings of her own