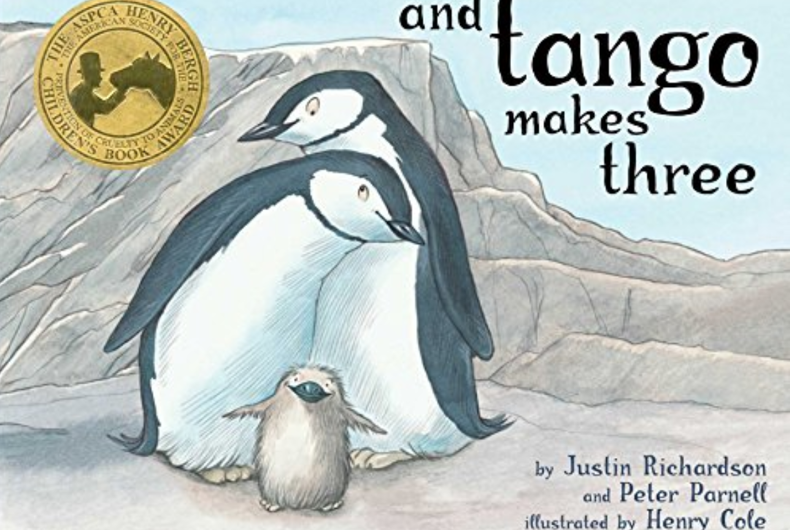 In the wake of Florida’s Don’t Say Gay law, schools in the state are banning books with LGBTQ+ themes, including And Tango Makes Three, a book about a baby penguin named Tango who has two dads.

The Don’t Say Gay law, also known as the Parental Rights in Education Act, was signed into law last year by Florida Gov. Ron DeSantis (R) and bans discussion of sexual orientation and gender identity in grades K through 3 and restricts such discussions in older grades.

Conservatives said the bill was necessary to stop sexual discussions in schools as well as instruction about sex and that the law wasn’t anti-LGBTQ+. The DeSantis administration called opponents of the bill “groomers,” another word for child sex abusers.

But it turns out that the bill is doing what opponents said it would do: making LGBTQ+ people a taboo topic in schools.

Popular Information reports that Lake County’s school district banned three books in grades K-3: A Day in the Life of Marlon Bundo (about a gay bunny who likes hula hooping), And Tango Makes Three, and In our Mothers’ House (about three kids with two moms).

A statement says that the books were “administratively removed due to content regarding sexual orientation/gender identification prohibited in HB 1557.” H.B. 1557 is the Don’t Say Gay law.

Seminole County Public Schools banned three books citing the Don’t Say Gay law. The books were 10,000 Dresses (about a trans girl with a dream of making dresses), I am Jazz (about the experiences of trans activist Jazz Jennings), and Jacob’s New Dress (about a boy who wants to wear a dress to school).

None of the books contain sexual content, but the district said they, “pursuant to the aforementioned statute [the Don’t Say Gay law], would be deemed as not being age appropriate or developmentally appropriate for students in kindergarten through grade 3.” They were removed from district libraries and “will only be available for check-out to a student in grade 4 or 5 when the parent has provided written consent and picks up the book from the principal or designee at the school.”

The DeSantis administration said in response to one of the legal challenges against the Don’t Say Gay law that it only applies to classroom instruction and not library books, but the Florida Department of Education is telling school librarians that “there is some overlap between the selection criteria for instructional and library materials” in its training materials for the Don’t Say Gay law and they should be “avoiding unsolicited theories that may lead to student indoctrination.” The materials tell librarians to “err on the side of caution.”

Opponents of the Don’t Say Gay law cited high suicide rates among LGBTQ+ youth and argued that erasing LGBTQ+ identities from school will make them feel more alone and isolated.

Editor’s note: A previous version of this article incorrectly stated that the book “10,000 Dresses” was about a boy, not a girl. We regret the error.

Parents & brother beat 16-year-old boy after he came out. They avoided prison.