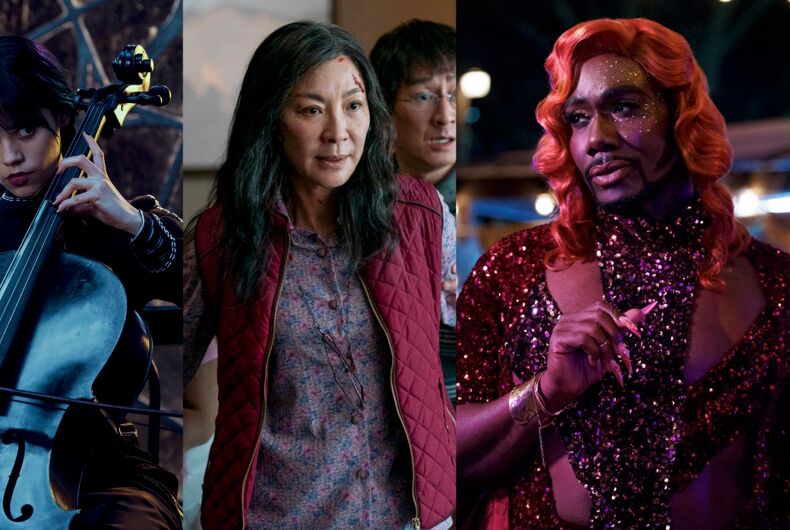 But we’re doing something a little different this year. Rather than rank the same celebrated media as everyone else, we asked staffers from all over the Q.Digital family to share the things they loved most in 2022. So, here they are: a few of our favorite things.

Time Is a Mother by Ocean Vuong

This might be a popular choice, but for good reason. As a queer writer of color with some complicated parental feelings myself, the way he describes his experience makes my bones ache a little bit.

The Heartstopper comics have had me in a chokehold for years now, and the TV show has only heightened my fervor. Yasmin Finney is a superstar.

I left the theater after seeing Everything Everywhere All at Once saying that I would feel tacky calling any film “a perfect movie”, but the thought hasn’t left me in the months since. It makes such unbelievable use of the medium (and the rock scene definitely changed me a little bit).

I think Renaissance is Album of the Year, but my favorite has got to be Technicolor by Madison Rose. A very indie queer artist making the most bombastic, genre-true pop you can get.

I am obsessed with Wednesday on Netflix. The goth girl in me desperately needed this content. The latest season of Atlanta is pretty awesome, too.

Anything I could say about this film will not do it justice. This film is literally everything. I went into it thinking it would be a hipster family drama, but I was pleasantly surprised when it seamlessly transitioned into a kung fu, sci-fi comedy.

SZA’s SOS is hands down my favorite album of the year. I have gone through a lot of heartache in 2022 and I have never felt more perceived. Listening to this album is like a hot bowl of ramen for my soul.

I love how Danyel Smith wove her upbringing and personal life with the stories of the prolific, iconic, often underrated Black Women in Pop. From Phillis Wheatley to Janet Jackson, Danyel highlights Black Women’s enormous contributions to music and culture.

The storytelling is elite and refreshing. At its core, it’s a movie about the relationships we have with our mother and partner, regret, and finding the power and good in yourself.

Couldn’t have asked for a better second season. It showed the depth of characters and covered some very heavy but timely topics with grace. There’s more to P-Valley than The Pynk.

It’s Beyonce’s love letter to the Black queer community. It’s perfect and I haven’t stopped playing it since it came out in July. Beyonce continues to push boundaries and redefine herself as an artist 20-plus years into her career.

Hard not to choose a song off Renaissance but I’ll go with another Houston-raised icon, Lizzo. I really enjoyed “About Damn Time”. Lizzo is so damn talented and makes feel-good music. And who doesn’t love a flute breakdown?!

Into Every Generation a Slayer Is Born: How Buffy Staked Our Hearts by Evan Ross Katz

I don’t think I’m unique in that growing up gay, Buffy impacted a large part of my life. So, without a doubt, it was super heartbreaking (but not surprising) to hear that the women of Buffy – specifically Charisma Carpenter – didn’t have such a great experience filming the series. I think what makes this fan book stand out more than other Buffy books is that from the jump, Ross hits hard at Joss Whedon and doesn’t sugarcoat his abusive nature on set.

I actually sat down and watched this when I was home visiting my dad one weekend and we legit were like that Portlandia skit when they binge every episode of Battlestar Galactica. It’s that good that you just can’t stop until you finish the final episode. It’s just exquisite: utterly strange, brilliant writing, and Sharon Horgan deserves mad recognition for her work this year. Honorary shout-out to AMC’s Interview with the Vampire. I like that the queerness wasn’t just subtext but the literal context of the plot.

I mean…you know what episode I’m talking about. “Rue on the Run” lives rent-free in my head solely based off the enigmatic performance by Zendaya: from screaming at Jules and her mom to jumping out of the car on a moving freeway, it’s electrifying. She truly is one of the greats.

Everything, Everywhere, All at Once

This movie is–well, everything! Michelle Yeoh just dazzles in all the senses. Go see it if you haven’t!

I’m an A24 girl at heart and Mia Goth really stood out to me in this role. I didn’t know I needed to be part of Ti West’s X universe, but I think it’s so cool that Goth wrote this sequel while filming the first one, so they decided to film it right after. Talk about carpe diem!

My year was held by two musical mothers: Carly Rae Jepsen’s The Loneliest Time and of course, Beyoncé’s Renaissance. I feel like this is all about to change once Sza’s new album drops.

The movie that reminded me that sometimes movies are great and not depressing and boring. A glitter bomb of a movie grounded by a transcendent performance from Austin Butler.

“Honda” gave me a reason to wake up in the morning.

Praise be to Murray Hill for bringing trans masc realness to the small screen in such a moving and unprecedented way!

All About Me by Mel Brooks

I would die for Mel Brooks and if you read this book you’ll learn exactly why.

This is a rich, complex, and beautiful story that kept me intrigued the whole way through.

I did not watch very many movies this year, as I am much more of a TV gal, but I did watch this one, and I really liked it! I especially like that it had a truly unpredictable twist.

I am obsessed with anything that Taylor Swift creates, and this is no exception.

This was one of those shows that I could not stop thinking about, even when I wasn’t watching it. It completely boggles and entrances the mind.

Why We Did It: A Travelogue from the Republican Road to Hell by Tim Miller

For books published this year, Tim Miller’s Why We Did It: A Travelogue from the Republican Road to Hell was satisfying in so many ways: as Miller’s atonement for being a gay man complicit in Republican anti-LGBTQ+ policies; as a repudiation of everything Trump; and as catnip for language lovers. (My grandmother would have said Miller has a way with the King’s English.) But my favorite book of the year was new to me in 2022: André Gide’s Corydon from 1920, the French intellectual’s Socratic and subversive defense of homosexuality in general, and “pederasty” in particular, which would make Chaya Raichik’s head explode if she could actually get through the short (125pp) novel. A Catholic Church Index of Forbidden Books selection in 1952.

Decision to Leave finds Oldboy director Park Chan-wook paying homage to Alfred Hitchcock, in a swooning love story set amid a police procedural and foggy Korean coastline that would have reminded the master of suspense of his favorite Big Sur. Like Hitchcock’s best work, all of the action – in rooftop chases and fluorescent-lit, chartreuse interiors – is in service of the kiss.

I haven’t bought an album in years – until I did in November – because buying music by song is what we’re conditioned for now. The best of those in 2022 was Lizzo’s “About Damn Time,” the song of the summer and the end of the pandemic. My boyfriend and I listened and danced to it maybe 30 times back-to-back after downloading it in June. It’s pure joy.

The extraordinary album was Barbra Streisand’s Live at the Bon Soir, her very first recording when she was just 19 years old, in 1962, and released only now after audio technology caught up with the great one’s exacting standards. An intimate, pristine portrait to be savored over cocktails.

Andor creator Tony Gilroy made something remarkable with this Star Wars story, a prequel to the compelling Rogue One. It’s the best, and best written, installment in the franchise since the original three films. It’s a different animal than those movies, dark and serious, with a commentary on authoritarianism that is so effective because it’s so relevant to our times. Stellan Skarsgård’s speech about personal sacrifice at the end of episode 10 is worth repeated viewings, and an Emmy Award for lead actor in a drama. Also, White Lotus, because Mike White and Jennifer Coolidge and “these gays are trying to murder me.”

LGBTQ+ TikTokers share the importance of chosen family around the holidays